Incredibles 2: Crisis in Mid-Life! & Other Stories is a lame attempt at monopolizing the Incredibles franchise. The small stories are dull, unentertaining and never have a full ending (cue “to be continued” meme for the monies). This comic patronizes children and they would probably hate you if you bought them this comic instead of any other hero'(s’).

Crisis in Mid-Life: Bob Parr (Mr. Incredible) is getting old and his power is weaker than when it was in his prime. As such he goes and consults Rick Dicker on how to deal with getting old. If the comic was meant for young children (which the level of art indicates), this plot would not interest them in the slightest. No kid wants to read about a mid-life crisis.

Bedtime Story: Bob tells Jack-Jack a bedtime story in order to calm the shapeshifting baby. In the story, he tells Jack-Jack how he defeated a villain at a supers conference. The small story is uninteresting and to see the “full” version you have to wait for the next edition. 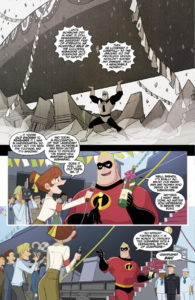 A Relaxing Day At The Park: Bob takes the super powered Jack-Jack to a public park. Jack-Jack “saves the day” with the smallest display of his powers I have seen. Bob somehow believes Jack-Jack never used his powers at the park (what the plop? Bob would probably be more anxious to leave Jack-Jack alone in public in all honesty and should by default assume Jack-Jack would do something). This is the only story with an ending.

All the characters we know in the Incredibles are turned into duller versions of themselves. There’s no personality or quips you’d expect with each of them. The stories don’t really lend themselves to showcasing them since they are all so tame and ordinary when they should be extraordinary. Hence, a comic for babies. Not for children.

There are different artists for each short story. Out of the 3, I only thought 2 were any good at capturing the actual character models properly. It’s a shame too since while the art is decent the story doesn’t allow much in the way of capturing any action or standout scenes. There might be only a few pages dedicated to action at all in each story while most of it is just unentertaining talking or typical family matters inside their house. If the writing was any good, it could have been like any decent superhero comic.

This is a comic you would give a toddler and the toddler would not even bother. There’s very little that happens and most of it is like reading about yourself doing the laundry in the safest way possible.

Disney and Pixar seemed to play this safe and put water wings on a franchise already known for having action, hilarious writing and darker undertones. They stripped all the good points and left mediocrity behind.

Megan here! I am pretty well versed in all things weaboo and geek. I've loved videogames since I was born and even made my own for my 3rd year of Multimedia at the University of Pretoria in sunny South Africa. I have enjoyed anime from the days when Pokemon was considered satanic and Aniplex used to exist on DSTV. In the past couple years I have really gotten into manga, particularly Berserk to see where the story headed after the original anime. If there's one thing I will always love 110% it is cats. Don't doubt my faith in my love for felines.
Previous Episode 48: Breaking the Hiatus
Next Is Marvel teasing the end of Daredevil, or something else? 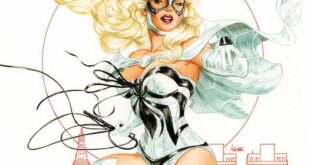