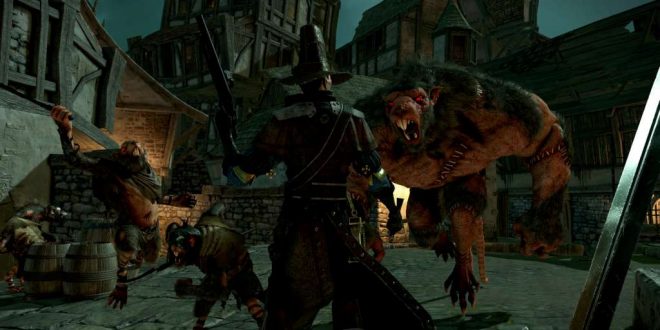 Warhammer: Vermintide 2 Vs. The Warhammer Franchise

Warhammer: Vermintide 2 proved a spectacular example of the Warhammer license done justice in a video game. My time with the brutal horde-survival game left me feeling awestruck from wading through the endless hosts of the Vermintide.

The past decade has witnessed the release of many beloved takes on both the Warhammer Fantasy and 40,000 settings. But perspective is everything when it comes to a team’s interpretation of a 30-year-old franchise. Today, we compare some of the better-known franchise releases side-by-side with Warhammer: Vermintide 2.

We’ll see what themes are retained across titles – and where different approaches are taken by the creative teams.

Fans of the Total War franchise realized immediately the marriage of Total War and Warhammer was a perfect combination. Real-time battles, combined with a turn-based campaign map, drew clear battle lines between the various races and factions vying for domination. The Total War team showcased a global perspective of Warhammer Fantasy, as well as giving each race a unique flavor and motivation for their conquests.

Total War: Warhammer grounds players in the all-encompassing conflict tearing the Warhammer world apart. Like Warhammer: Vermintide 2, the flawed forces of Order are trying to overcome the tides of Chaos threatening the current status quo. Both games present a devastating world of unending war, caused by civilized nations clashing with Chaotic forces.

The defining difference between Total War: Warhammer and Warhammer Vermintide 2 comes through the player’s perspective on the world around them

Warhammer: Vermintide 2 presents a clear villain to tear apart. The Skaven and Chaos-Warriors are the incontrovertible enemy of civilization – characterized accordingly to fit their world-ending narrative. The Warhammer: Vermintide games take place during the End Times of Warhammer, where the known races are aligned with each other intent on either saving or destroying the known world.

On the other hand, Creative Assembly’s Total War: Warhammer games present each faction individually. They’re intent on imposing themselves as rightful rulers of the world, above all other inhabitants of the world. Whether you’re playing as the human Empire or the undead Vampire Counts, it’s you versus everyone else.  Hints dropped in Creative Assembly’s title support that only lesser degrees of malice exist in the Warhammer world. The only clear protagonist in Total War: Warhammer is the player’s current faction. The rest of the world must come to heel under your rule.

Dawn of War is a real-time strategy classic that’s been around since 2004. Its popularity spawned 2 sequels over the next decade, with Dawn of War II in 2009 and Dawn of War III in 2016. Apart from the lukewarm reception of the latter titles, fans of Games Workshop’s 40,000 franchise have praised the game’s adaptation of the original source material. The insanely over-the-top action the Dawn of War franchise presents encompasses the feeling of the 40,000 franchise tagline:

In the grim darkness of the far future, there is only war.

Both Warhammer: Vermintide 2 and Dawn of War instill players with the nauseous brutality that their horrific conflicts inflict on the world around them. The body counts and gory remnants of battles make players understand how awful living in the world must be. The most ruthless actions imaginable condoned in the name of victory, and warfare’s chaotic violence turned up to 11

If the fantastic setting of Warhammer: Vermintide 2 seemed too unbelievable to you, wait until you’ve seen anything taking place in Dawn of War’s Warhammer 40,000 universe.

This is a world where the unbelievable was escalated to a galactic scale. Dawn of War flaunts its source material everywhere, from the barbaric Orc Warriors to the hulking Space Marines. This is one of the most hilariously over-the-top dystopian futures I’ve ever seen – prioritizing gigantic metal armor and chainsaw-wielding knights to any grounded sense of futuristic sci-fi direction.

Despite the bombastic setting, Dawn of War takes an unexpectedly poignant position about the nature of warfare in its setting. Not a single faction can say they’re ‘winning’ the overall galactic conflict of the far future. Every faction is simply trying to retain what they possess – even the evil Chaos Marines. It hammers home how pointless the constant conflict becomes when everyone ends up exactly where they began. Compared to Vermintide 2’s victorious escapes, Dawn of War’s frenetic missions end with you witnessing what you’ve wrought on the battlefield.

If Warhammer: Vermintide 2 was the End Times version of Left 4 Dead, Space Hulk: Deathwing is its closest equivalent in the Warhammer 40,000 franchise. Players take control of a team of hulking Space Marines, intent on clearing out Gene-Stealers from a gigantic battleship.

Both Vermintide 2’s Fatshark and Space Hulk: Deathwing’s Streum On Studio prioritized attention to reverent world design. Levels in both titles retain shock and awe when reaching a new area, causing moments of appreciation for the incredible scenery. As a matter of fact, each game’s environments tell the people’s story much more clearly than the characters themselves.

The worlds present similar hints of ominous religious beliefs too. There’s troubling iconography across both Warhammer: Vermintide 2 and Space Hulk: Deathwing. Zealotous human religion is the dominant binding force between each franchise’s respective human faction. Scripture, statues, and xenophobic belief are paramount to human identity in both games.

Warhammer: Vermintide 2’s prologue explains exactly why the horde is such a despicable enemy in the player’s mind. They’re portrayed as a ruthless society, whose cowardly individual nature constantly contends with their ravenous desire for conquest. Their only advantages in war are their near-limitless numbers and a penchant for dangerous technology. Boss encounters and character dialogue further reveal the Skaven’s calamitous intent.

The Vermintide are aptly named for their nature. I felt there was no redemption for the Skaven hordes after playing the game.

Conversely to Warhammer: Vermintide 2’s Skaven, Space Hulk: Deathwing obscures the motivation of its Gene-Stealer alien antagonist. Deathwing’s dark environments instill horror in the players. The creative decision of Streum On Studio prompted designing an unknowable evil for players to face against. Players guess what the aliens want with the spaceship and their issues with the Space Marine team. Only brief mentions tell who exactly the player’s facing throughout the campaign. Even the player-controlled Space Marines don’t know why they’re fighting against the alien horde.

You can infer they’re trying to steal Human DNA… but otherwise, the Gene-Stealers don’t become a fully-realized antagonist in Deathwing.

Vermintide 2 and The Warhammer Legacy

All of these titles share core aspects that appeal to fans of the Warhammer license. Grim outlooks and deeply flawed societies permeate the Warhammer franchise. These aspects make an otherwise out-of-this-world setting surprisingly grounded in its own fiction. Players realize there’s something wrong in the world around them through the spectacle-driven wars put into perspective. The wars are not Good and Evil battling to set the world right. Rather, it’s a world of Order against Chaos, where there are only worse alternatives to the current world order.

But Warhammer: Vermintide 2 doesn’t blare out these wrongs to its audience. On the contrary, character dialogue and clues in the surrounding environment tell the tale. There’s been only one constant for the protagonists here. Unending, unceasing war.

Mike Allio is a writer from the Greater San Francisco Bay Area in California. He's a passionate creative, and when he's not writing he loves playing video games. Some of his favorite series have darker tones to them - Dark Souls, Bloodborne, and Mass Effect are just a few of his favorites. Check him out on Twitch.tv/adaywalker, and follow his Twitter handle @TheMikeatNite to learn what he's up to.
@TheMikeatNite
Previous The TMNT’s Bebop and Rocksteady are going on a cross-country road trip
Next Suicide Squad: Hell to Pay chapter 1 (Comics) Preview