DC Collectibles has been cooking up some awesome statues the last few years. This one might take top billing over all of them though. It’s a bust of Joker from none other than Rick Baker.

Baker is a legend, and that’s probably putting it mildly. The makeup effects artist has been in the big league Hollywood game for decades. Trust me, you know Baker’s work. You’ve seen it in franchises like Star Wars, Gremlins, Men in Black, X-Men, and tons more. He’s even won a monster 7 Academy Awards in the field, so yeah, he’s kind of a legend. And now he’s lending his talents to DC. 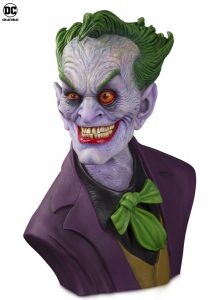 “DC Collectibles is always seeking out interesting artists from different industries to bring their unique art styles to DC’s popular characters, and we are thrilled to partner with Rick Baker on this sculpture,” explained Jim Fletcher, executive creative director of DC Collectibles. “From the disturbing eyes to the sinister smile, Rick did a masterful job capturing The Joker’s psychotic demeanor.”

“When DC Collectibles approached me about this project, I jumped at the chance to do something with The Joker,” said Baker. “The Joker is one of the most notorious Super-Villains of all time, and I had a blast depicting his twisted and demented personality through this bust. The DC Collectibles team was great to work with and gave me complete creative freedom to bring my version of the character to life.”

His version indeed, as this Joker is a fair bit unique. First there’s the skin tone, hued in purple with bulging green veins. Baker also added a glare that makes him look like he’s had one too many espressos (and zero sleep).

This all culminates in a bust that’s as creepy as it is iconic. This is going to be one big replica of the Clown Prince too, as DC reveals the piece will stand a towering 22.5″ tall. It’s going to be rare too, with only a scant 200 units made.

And you guessed it, Mr. J is going to be rather expensive too. How expensive? How’s a cool thou sound? Yep, this bad boy will run you $1000.00 USD when he arrives this October.

Jason's been knee deep in videogames since he was but a lad. Cutting his teeth on the pixely glory that was the Atari 2600, he's been hack'n'slashing and shoot'em'uping ever since. Mainly an FPS and action guy, Jason enjoys the occasional well crafted title from every genre.
@jason_tas
Previous Toy Fair 2018: DST set to blitz the show with Sonic the Hedgehog
Next Nintendo Outlines the Toy-Cons of LABO