The legendary captain returns in Nemo Rising, an adventure that will set both him and the Nautilus against a brand new menace for control of the seas.When I first saw the description for the upcoming novel Nemo Rising, I was skeptical. Basically, the long since defamed Captain Nemo is called upon to investigate and put an end to a series of attacks from what looks like giant sea monsters. The resulting journey is a pulpy, action filled adventure.

But is this new novel from author C. Courtney Joyner worth your time? Let’s take a look.

An adventure on the high seas 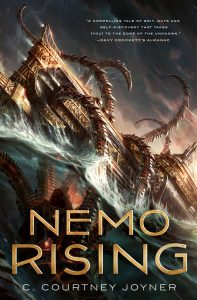 Without getting into spoilers, this section is going to focus on the ups and downs of the overall plot.

This story undoubtedly takes place in the universe that Jules Verne created with the publising of 20,000 Leagues Under the Sea in 1870. Fantastical creations permeate the entire plot.

To call the storyline of Nemo Rising heart racing would be an understatement. There are very few low points. Even when the action is slow, the tension is palpable.

The premise of Nemo Rising is believable in the world in which it exists. There are fantastical creations like mirrors that allow the users to video chat over a distance, monsters that were previously unknown and creations beyond even the imagining of Verne himself. These departures help to keep Nemo Rising feeling fresh, but still anchored in the same world as 20 Thousand Leagues.

There is one part of the plot that is undeniably cool, but I am not sure how fitting it is with the overall story. It really alters the feeling of the entire Captain Nemo saga, and while I still enjoy it, I am left wanting a bit at the end of the chronicle.

Strong wrting for a fantastic story

Joyner’s style is a joy to read.

In many stories, intense action and battle scenes can lose their thread if the author is not careful and skilled in bringing such scenes to the reader. In Nemo Rising, all of the high action situations are clear as a bell. Whether taking place near the shore or in the middle of the ocean, the action here is always clear.

I feel that this is worth distinction due to the ways in which some books handle their action scenes. The reader can tell that Joyner has carefully crafted such scenes in Nemo Rising to be both compelling and comprehensive at once.

It is obvious from style alone that Joyner is an altogether different author than the original Verne. Joyner’s style evokes images and ideas reminiscient of one of the fathers of science fiction however, and the result is an enjoyable romp through a world first introduced in the classic 20 Thousand Leagues.

The question of originality was my biggest problem with Nemo Rising.

While the plot is compelling and expansive, I argue that the moments of mystery really shine through. Once Joyner breaks down the story for readers, the allure fades. It seems like the scenes where there is some unknown menace are much stronger than the scenes where the obstacle is an obvious measure of opposition.

In the pages of Nemo Rising, readers will step back into the mind of the infamous Nemo. There is some more insight given to his motivations, which is really interesting for longtime fans. Nemo also goes through a pretty substantial story arc, proving that even old, sea-obsessed men can grow if given the chance.

In the final pages of the book, I felt an incredible similarity to an unnamed game series. While these similarities could very well be coincidental, the closeness of the structure of the final arc to this series overwhelmed me. This similarity is not unwelcome, and would likely not be noticeable for people without the video game knowledge, but were jarring indeed for me.

The addition of historical figures such as Ulyssus S. Grant to the mix was a welcome addition as well, as he played an important role as a secondary protagonist. Worth mentioning though, is that at times his role overtakes even Nemo’s. Given the nature of the book, this is problematic.

"Nemo Rising" brings a classic tale into the new millenium to be enjoyed in a different light. The additions do not outweigh the heaviest callbacks and obvious inspirations, but the overall ride is well worth the journey.

Erich was introduced to gaming by his grandfather before he could walk. Since then, he has grown up loving Nintendo and most games in general. He couples his love of videogames with journalism to cover news, provide reviews and tell it how it is in the gaming world.
Previous Bloom County: Shenaniganary coming in 2018
Next Nintendo Download: Ho Ho Haute Couture