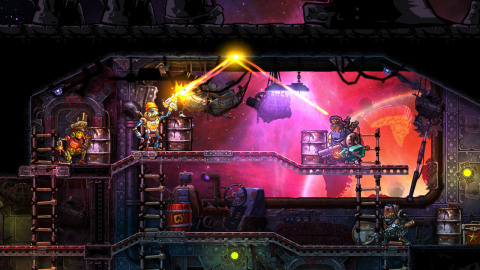 A second lean week on the Nintendo Download nonetheless includes a few gems. Vs Super Mario Bros, Steamworld Heist and more all hit this week.

So, there’s not a lot of content this week on the Nintendo Download. For the second straight Holiday-time week, the spread of the company’s consoles only see a few titles debut. As I pointed out last week, this is pretty typical. The week leading up to Christmas (and just after) are typically quiet. Thing is though, unlike last week, this week actually has some good stuff.

There might not be many of them, but the games for this last week of 2017/first week of 2018 include the likes of SteamWorld Heist: Ultimate Edition, Vs. Super Mario Bros, Guns Gore and Cannoli, and King of Fighters ’96. All of those are solid to good, and all of them are available on Switch. Not too shabby if you found one under the tree.

Jason's been knee deep in videogames since he was but a lad. Cutting his teeth on the pixely glory that was the Atari 2600, he's been hack'n'slashing and shoot'em'uping ever since. Mainly an FPS and action guy, Jason enjoys the occasional well crafted title from every genre.
@jason_tas
Previous Nemo Rising (Book) Review
Next Episode 23: Xbox Games With Gold And More