Our heroes find themselves outnumbered by Babel and his Loa atop Babel’s tower. Shadowman remains impaled. How will they escape this situation? Pick up Rapture #4 and find out. 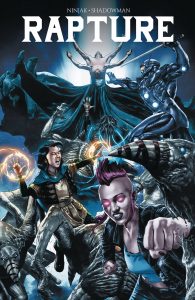 Babel convinced Shadowman to release his Loa. To give up the power that came with it. Whatever means it took to convince Shadowman, he proceeded willingly. Impaled atop Babel’s tower, where multiple Loa stand with Babel to stop Ninjak and the others from foiling their plan. To breach the heavens once again.

Jack Boniface is able to do what few others are able does not dissapoint. Shadowman is able to snap the pillar that he is impaled upon, and is able to reconnect with his Loa before the group is chased off the tower by falling flood waters.

Jack briefly ventures into the heavens, where he meets the spirit of is deceased father. Years ago, Jack murdered his father, so this was a visit of mixed emotions. In the end, the visit instilled Shadowman with what he needed to turn the tide.

Returning from heaven, Jack goes to take on Babel, only this time he’s got three Loa on his tail. Tama tells the group not to interfere, that Jack needs to do this alone. He can prove to himself what he is capable of.

Before long, the Loa were kneeling around the tower, defeated by Jack and his Loa. the time has come for Babel to pay for his crimes. And this is where that trip to heaven paid off.

To learn the details of how Babel is defeated, you’ll need to pick up a copy of Rapture #4 for yourself. Once the dust has settled, the heroes go their separate ways. Ever mindful of what is possible if power falls into the wrong hands again.

Tama and Shadowman have a quick chat regarding the Liveside, or heaven, and if he saw anything while he was there. Jack never admits to what he saw, but it most likely had more effect on him than anyone will ever know.

One week later, Tama and T.A.D.D., her companion find themselves back in the strange caves of the Deadside where they were when this while thing started. Tama has a promise to keep, and intends to honor it.

The conclusion of the Rapture arc has been quite a thrill for me. Given the number of heroes involved, there was no in-fighting, but rather an issue full of redemption, atonement, and honor. Sometimes nowadays, these issues get tossed aside for a good picture, or a quick laugh.

Jack Boniface comes to terms with who he is and what he can do. Tama goes out of her way to honor an agreement. Even Rex takes on the daunting task of watching over things so events like this don’t happen in the future.

A feel-good conclusion you can be proud of. If you haven’t already, now’s a good time to acquire Rapture #1-4, you will not be disappointed.

This issue wraps up the story of Rapture, and is all about the Shadowman. From his impalement to redemption, and the hills in between. Doing what must be done to save the world of the living, is certainly worth a read. Pick up a copy of Rapture #4 for yourself today.

A fan of media on multiple platforms, I am always watching or playing something! Who knows what I will be on to next?
@mackeyp42
Previous IDW details Hascon slate with panels and exclusive books
Next Denver’s Akihabara provides a new mecca for gamers