SDCC 2017: The Justice League and more arrive at Sideshow

Sideshow had a fair amount of pretty incredible stuff at Comic Con 2017. Chief among the company’s DC offerings were a full slate of Justice League sixth scale figures.

One of the biggest movies of the year has yet to land at theaters. Hitting in November, Justice League is the film that will finally bring all of DC’s biggest heavy hitters together on the big screen. Wonder Woman, Flash, Batmen, Cyborg, Aquaman, and -yes- Superman, will all be a part of things.

You can check out the latest trailer for the film here, and have a peek at not only the Justice League sixth scale figures, but characters from Suicide Squad, BvS and more right here in the gallery below.

So what about the source material?

While Hot toys has the movies covered, Sideshow itself is still forging ahead with some incredible comics-based figures and statues.

Spinning out of the pages of Batman comes a fantastic looking Legendary Scale figure. Slightly smaller in scale, but no less impressive, is the Swamp Thing maquette. Both awesome pieces. As for the Gotham City Nightmare Batman, well it’s a little out there. Still cool, but it looks more like Man-Bat to me than anyone else.

Lobo was on display at the Con, but so was a brand new offering. A redesign of Sideshow’s popular Batman sixth scale figure is on the way, and looks terrific. I had heard about this before the Con, and honestly I wasn’t all that interested. After seeing the shots of the figure though, I’m somewhat more inclined to add this version of the Dark Knight to my collection.

The more textured suit, and classic blue and grey colors look great, and I can’t say enough about the head sculpt. Although I did like the original, this new figure is light-years ahead. Loving the detail here, and can’t wait to see more. 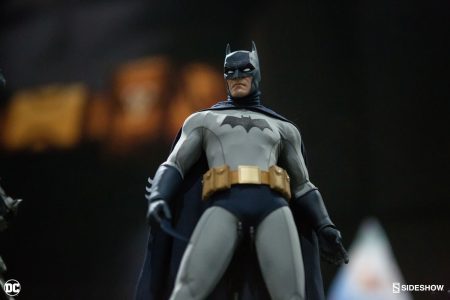 Jason's been knee deep in videogames since he was but a lad. Cutting his teeth on the pixely glory that was the Atari 2600, he's been hack'n'slashing and shoot'em'uping ever since. Mainly an FPS and action guy, Jason enjoys the occasional well crafted title from every genre.
@jason_tas
Previous Atari teams with NECA, ties in new Speakerhats with Blade Runner 2049
Next Nintendo Download: Embark on a Very Personal RPG