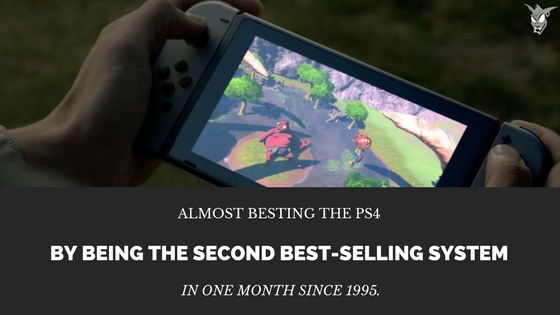 The Nintendo Switch Is the Second Best Selling console since 1995

With only a  month and a half on the Switches belt, it seems that most people enjoy it. Well, be it with some technical difficulties, the National Purchase Diary (NPD) results of March are in. The Nintendo switch sold 906,000 units in March in the United States alone. Making it the fastest-selling console in Nintendo’s history.

Almost besting the PS4 by being the second best-selling system in one month since 1995. To keep up with this high demand Nintendo is doubling production of the Switch with aims of manufacturing 16 million plus by March 2018.

Sam Naji, an NPD Analyst had a few words to say:

“March 2017 will go down in history books as the month Nintendo broke records. The Nintendo Switch had the biggest hardware launch for a Nintendo platform and the second biggest launch for any video game platform since 1995, the time NPD began tracking this category.

With an addition of The Legend of Zelda: Breath of the Wild earning second (sold better in the US) and Tom Clancy’s Ghost Recon: Wildlands PS4 nearly selling out in Japan.

Numbers don’t lie and It’s clear that the fans love the Switch but the reason I think the Switch is selling so well is because it’s a console. It’s just a console, and I think that’s just what we need right now. There’s plenty of other devices to Binge watch Netflix or surf the Internet. It’s the player and his OFFLINE games that require them to go face to face with their friends (1-2-Switch) or think about open world gaming in a completely different way (The Legend of Zelda: Breath of the Wild).

Let me know what you think about the Nintendo Switch in the comments down below or on Twitter @Dylanslegos! Do you have a Switch? Do you play it? Do you play it on the toilet?  Well, maybe not that but you get the point.

Dylan is a writer, gamer, avid movie lover, and PlayStation extraordinaire. Currently, he attends Radford University in pursuit of a BS in Media Studies with a concentration in Journalism. When he’s not writing the next epic post (but you know he is), he plays games like Destiny, Uncharted, Wolfenstein/DOOM/Dishonored; long story short: If I played the game, I liked it; if I haven't played it, just remember that I'm in college.
@Dylanslegos
Previous Bandai Namco introduces its blood-soaked action/RPG Code Vein
Next Neon Genesis Evangelion: Legend of the Piko Piko Middle School Students Volume 1 (Graphic Novel) Review