By 1954, Hellboy had become a mainstay in the BPRD lineup. This time, an old friend calls in a favor, bringing the team to Hong Kong. They arrive during the month long ‘Ghost Moon’ celebration, where the people offer up food and funds to the spirits to take back to hell. Or so they say. Find out what the festival is really about in HellBoy & The BPRD 1954 – Ghost Moon #1. 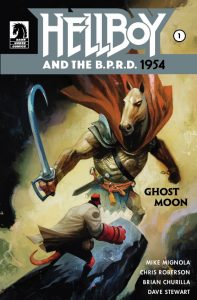 Every nationality has its own rituals. Sometimes more than one at a time. When the BPRD land in Hong Kong, it is during the Ghost Moon festival, celebrating the hungry ghost. We Meet Roland Childe, who gives us a rundown of what he’s been up to in China. Operating under the direction of a Lady Cynthia, tracking down lucrative opportunities.

When they went to the walled city of Kowloon to meet with some contacts, their associated were attacked before any such meeting could take place. Mr. Childe retreated, one associate is yet unconscious, while the other never made it out from the city. Not the best odds to start a search. Add to this, that the attackers did not appear like normal men, but rather, monsters.

Mr. Childe tells us how Kowloon is technically outside both China and Britain’s control, so it is a bit of a lawless territory. On top of that, there has been an influx of people moving to the territory. Sadly though, these people are all missing at the moment. Or are they? Agent Susan Xiang gets a feeling that leads her to a ring of inanimate bodies. The bodies are not dead. Yet. But something is drawing the life energy out of them, all of them. 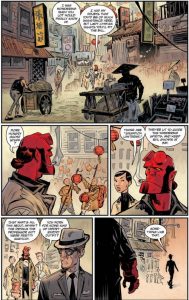 Mr. Childe informs the team that it sounds like they are searching for something known as a Hunping, known as funeral urns or spirit jars. This was what Lady Cynthia had sent her associates after, though they never expected to encounter such difficulty. As Susan leads Hellboy and the team toward the source of all this mysterious power that is most likely coming from the Hunping, they are accosted in the street by those who took Mr. Childe’s partner.

Their attackers are two large assailants: One with the appearance of a bull, the other looking like a horse. Both standing erect on two hind legs, wielding dangerous looking hook swords. Neither are vulnerable to pistol fire, and even able to shake off a punch from Hellboy’s Hand of Doom.

While Hellboy and Archie contend with the beasts outside, Susan and Roland split up inside a dark house, in search of the man with the spirit jar. Susan finds a man bound by ropes on the floor, barely alive. Roland Childe finds a glowing trail of spirits leading him to something that can only be inexplicably evil.

Things look rough from all sides here. While Hellboy can stand toe-to-toe with the beasts, his partner Archie’s days are numbered if something doesn’t change quickly. Susan recognizes a tattoo, though we don’t yet know why. And Roland Childe has walked into a room full of spirits, and one man with dreams of immense power.

The BPRD are used to taking on unusual attackers. Hong Kong is a different terrirory, and not everyone is familiar with the way of life there. Add to that, no one's used to being attacked by horses, bulls, and having spirits drained. Grab your copy of HellBoy & The BPRD 1954 - Ghost Moon #2 and see how they resolve this.

A fan of media on multiple platforms, I am always watching or playing something! Who knows what I will be on to next?
@mackeyp42
Previous Immortal Brothers: The Tale of the Green Knight #1 (Comic) Review
Next Nintendo announces new amiibo for Link, Cloud, Corrin and Bayonetta