Featuring stunning, highly detailed digital dioramas and innovative, tactical gameplay, Wartile takes players on a journey through intricately crafted environments as they lead a hoard of Viking warriors through a series of beautifully detailed battle boards, each with its own story and lore.

Wartile is a single player and multiplayer real time tabletop inspired game for PC with a strong turn based flavor. The game replicates the feeling of playing a tabletop game but with a tactical edge and more immediate combat. Each Battle Board is an intricately realised digital diorama complete with tiles that allow players to strategize their tactical moves and attack in real time. Units are fully customizable with armor, weapons and new stat tokens that players can pick up throughout the game by completing special challenges.

Stat tokens provide points that players can add to their characters’ stats which unlock when players level up and are found in each of the various Battle Boards in the game. Players can add a tactical slant to their close quarter and ranged combat moves by utilizing Ability cards and Godly cards as their figurines gain more experience and by completing special Battle Board objectives. Godly cards and abilities can be assembled by the player before engaging in battle and used during combat. These cards can easily change the course of the fight should the odds 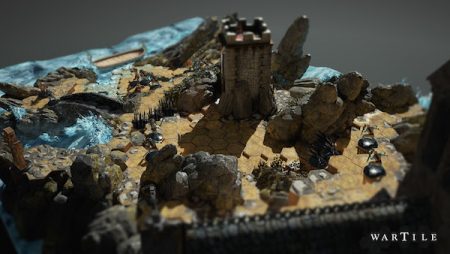 be stacked against their favor.

From TableTop to Digital

Wartile’s beautifully realised digital dioramas and innovative game mechanics aim to bring a wholly unique and refreshing perspective to the RTS genre. Players will be challenged to utilise their Viking figurines carefully in both ranged and hand to hand combat as they navigate each Battle Board toward their objective. Wartile will also be making an eagerly awaited appearance at EGX Rezzed in London’s Tobacco Dock in the Unreal Showcase Zone from the 30th March through to 1st April.

A fan of media on multiple platforms, I am always watching or playing something! Who knows what I will be on to next?
@mackeyp42
Previous Buy One Get One Power Rangers Ticket Using Atom Tickets
Next Cheetah takes on the DCU in new Injustice 2 trailer