Once again one of the biggest toy brands out there, TMNT was in full effect at Playmates’ Toy Fair booth.

If you like the vintage TMNT line from the 1980s/90s, then you’re going to love what Playmates has on tap. They showed off lots of new items, mostly stuff that ties into the current TV show. Yes there was plenty of that, and you’ll see it all in the gallery below.

But some of those figures aren’t just modern in nature. Some of them harken back to the glory days of the original Playmates Toys TMNT figure line. And if you’re a long time fan like I am, then you’ll love hearing what was showcased. 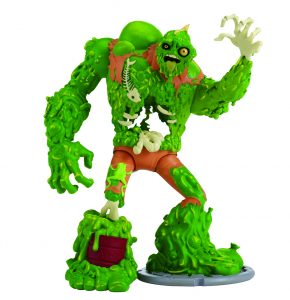 A minor character at best, the Muckster was an awesome figure in the vintage line. And he seems to be one of those characters that fans remember with that magic nostalgic glow. Well, he’s back. And with a hole punched clean through him!

While Muckman looks awesome, and a little gross, there was plenty more to gawk at. Also included in future waves of TMNT figures are the Turtles themselves, all dressed up in themed outfits. Monster Turtles galore, Samurai armor clad Turtles, and more of the popular WWE figures will all be coming up soon.

Then there were the classically styled Bebop and Rocksteady figures.

These two bad boys look head-and-shoulders better with their original cartoon togs. Kind of ‘must owns’ if you’re a fan of the originals.

Maybe the coolest single figure out of all of this though, was Usagi Yojimbo. Yes, the Stan Sakai-created warrior rabbit was a part of the original TMNT run, and he’s back. While you can see the basic figure for him here, there’ll actually be another two, making it a trio of Usagis that’ll hit in 2017.

Here’s a peek at the full lineup of basic TMNT figures:

Of course, the basic assortments were not the only show in the Playmates booth, as there were a whole mess of additional figures. For starters, there were the Mutant XL’s, which are exactly what they sound like – giant TMNT figures.

Each one stands in at 11″ tall and features the basic five points of articulation. No word on who might be next in the series, but of course things are starting off with the fab four.

Prefer your giant sized action figures to talk to you? Well Playmates had that too, with the Talking Giant Ninja Turtles. Also measuring 11″ tall, the talkers shout out random phrases when you push their belt buckles. They also have more articulation than the standard eleven-inchers, with Nine points of poseability.

Always a big part of the Turtles toy lines, the vehicles weren’t forgotten at Toy Fair.

There weren’t a ton of them, and what was shown off isn’t mind-blowing by any means though. But, they were present. So at least there’s that. I will say that the horses were pretty slick however. And I’m almost positive there were horses in the original Turtles Samurai series, way back in the early days of the line. So it’s neat to see that making a return.

That’s it for this look at the figures and vehicles of the Teenage Mutant Ninja Turtles, but there’s more to come. We’ve got a look at the rest of this year’s line posting in the next few days. So stay tuned!

Jason's been knee deep in videogames since he was but a lad. Cutting his teeth on the pixely glory that was the Atari 2600, he's been hack'n'slashing and shoot'em'uping ever since. Mainly an FPS and action guy, Jason enjoys the occasional well crafted title from every genre.
@jason_tas
Previous Enough fill-ins, the REAL Venom returns this May
Next DC reveals the return of the original Flash in new cover image