Alwa’s Awakening: An NES homage that loves you as much as it hurts you.

Alwa’s Awakening is a neat little 8-bit NES-style video game developed by Elden Pixels that at first I thought was underwhelming. However, as the game progressed I began to see how much thought went into it. A lot of care went into the game mechanics – which is usually meant as the primary principle of game design.

The game has simple mechanics overall, but the use of which needs to be mastered in order to progress. You’d actually think it’s pretty straight forward… until you look at your death counter and tense up every time you get near some spikes. The target market of the game is clearly fans of old, retro adventure games – think Castlevania, Metroid or Hocus Pocus (yes, it reminded me of some old Windows games).

The story is pretty run-of-the-mill. The peaceful land of Alwa is dominated by the evil Vicar and his 4 evil Protectors, each stealing an ornament of power from Alwa’s inhabitants. It’s up to you, Zoe, a summon from another world to save the land, retrieve the ornaments, and restore peace.

The developers wanted to make the game as NES authentic as possible. There are the basic side-scrolling elements, jumps, crouches and climbs you will use to explore the world. What’s really interesting are hidden areas, treasures and your staff. 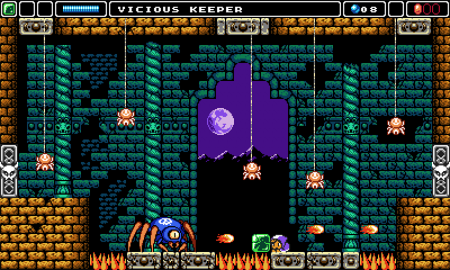 You wield a staff that you can attack and cast spells with (albeit not any from the start). As the game progresses you gather power from collectible orbs scattered throughout areas as well as unlock spells. These spells need to be used to go into previously inaccessible places and fight foes. I gained a great appreciation for some of the level designs where you’d look and say “How the heck can I get there?”. Then when you get the power you need you have your “Eureka!” moment. However, I decided Zoe was better off being suicidal as a shortcut rather than backtracking at times. An unfortunate side-effect of these kinds of level designs.

A stumbling block for me though, was the in-game menu and PC keyboard controls. Some of the UI feels clunky, and I’d prefer if I could set my own keys – which you can if using a controller. When I changed over to a pad it made it a lot easier (and less arthritic) for me to play.

That’s because Alwa can be downright brutal and rage-inducing at times. Backtracking and grinding through areas to get to bosses and items can be frustrating as there are insta-kill obstacles and challenging enemies. A good tip, which I should have done, is make your own map just like you would have for old Zelda games (pen and paper style! -ed). I underestimated the game and went in loops trying to find what I needed.

I spent somewhat too much time in the beginning area because I started wishing a new song would play. The chiptunes are good, but stay in an area for too long and they might grate on you depending on your tastes. On the other hand, I definitely enjoyed the rest of the areas and the boss themes. The sound effects are done well too, and fit the NES theme to a tee. 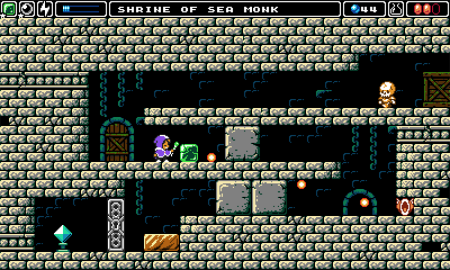 The color palette and pixel art for this game is great! The pixel artist knew their colors well and made sure they complimented all the time. A nitpick is some of the people are a bit edgy and blocky when compared to the utter adorableness of the main character – especially when she crouches. IT’S SO CUTE!

– The spikes of rage-quit (seriously, if you are a pixel out of place – DEATH)

– A few hitbox and enemy glitches (I managed to get a slime to fall to the screen below and crawl on invisible space – “I want to break free!~”)

Alwa’s Awakening can be pricey depending on what you want out of the game ($9.99 as of writing). If you really enjoy these types of NES style, action, adventure, puzzle games I’d say go for it – but if you’re unsure maybe wait a bit or look at some more of the gameplay before you decide. It is a long game – I’ve spent 5 hours plus on this. The game can be a seesaw of emotions – one minute you are pleasantly enjoying it, the next you’ll want to smash your keyboard or controller to bits because you just missed that platform, fell to your death and have to go all the way through the trials again. The interconnected open-world allows freedom of direction but at the cost of progressing efficiently. Some may enjoy this, some may not. At it’s very essence, I say Alwa’s Awakening accomplishes what other games could not – capturing that nostalgia of games of yesteryear.

Love the atmosphere, hate the backtracking - but that's what makes these games last - finding treasures and every collectible you can. It is enjoyable nonetheless.

Megan here! I am pretty well versed in all things weaboo and geek. I've loved videogames since I was born and even made my own for my 3rd year of Multimedia at the University of Pretoria in sunny South Africa. I have enjoyed anime from the days when Pokemon was considered satanic and Aniplex used to exist on DSTV. In the past couple years I have really gotten into manga, particularly Berserk to see where the story headed after the original anime. If there's one thing I will always love 110% it is cats. Don't doubt my faith in my love for felines.
Previous Get your first look at Warhammer 40,000: Space Wolf
Next Assassin’s Creed air-assassinates home video next month 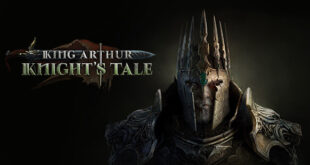