With a fondness for lost causes, and haunted by the faces of those he couldn’t save, we learn a bit more about what makes the nomadic warrior angel Sirian tick, in Eternal Descent Sirian #1. 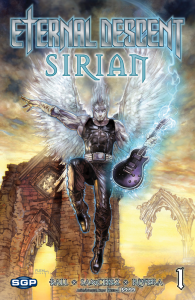 We find Sirian sitting in a restaurant with a depressed girl, Izanami. She thinks it’s just another jerk trying to pick her up. She shoots him down, tells him to go away. He tells her that he knows on one of her deepest darkest thoughts that she is battling with. Regardless of how truthful he may be, she’s not buying it. He tells her a grand story about an angel descending from Heaven to battle the forces of Hell. She leaves the restaurant, telling him not to follow her.
Sirian follows Izanami down the street. After her heel breaks, and he comments on the state of the environment and her footwear, she dismisses him again. She goes about her day, and is reminded of some underlying pain that she is trying to avoid in her life. Like a bad penny, she encounters Sirian again on the sidewalk. After a brief display of kindness, Izanami begins to open up to our hero. She asks ‘are you some kind of angel?’

Amidst Sirian’s dealings with Izanami, we are treated to glimpses of his history. 10,000 years ago, and in Bab Edh-Dhra, and more. We learn that Sirian was once a member of the Seraphim, the highest order of heaven’s angels. He gave up his seat among the angels in Heaven to fight against the Lords of Hell as they attempt to take over the Earth. Sirian really cements Izanami’s trust when he plays a portion of a song. A song that was only shared with her. He shares with her why he left his lofty position, and how he has aided many people that have needed his perspective, or his abilities over the millenia.

Now, I admit, I am late to the material that makes up the Eternal Descent universe. I am, however, glad that Space Goat is putting out these individual stories. Sirian will go against the grain in order to stand up for those who need it. Loki makes a brief appearance in this title, and we know he will be back. Who else will Sirian cross paths with as the story unfolds? Llexi Leon presented the original Eternal Descent books before, so it is only fitting that he has a presence in reviving the series.

Sirian may be a fallen angel, but don't let that moniker put you off. Not many people, human or other, would leave a cushy position to help the less fortunate in times of need. I can't wait to see how this Eternal Descent story continues.

A fan of media on multiple platforms, I am always watching or playing something! Who knows what I will be on to next?
@mackeyp42
Previous The Flash The Present S3E9 (TV) Review
Next A Clockwork Update Comes to We Happy Few