Injustice: Gods Among Us: Ground Zero takes fans back to the start of the alt universe. And you’ll be seeing it all through the mad eyes of one Harley Quinn.

DC Comics’ Injustice: Gods Among Us series is something of a hit

Well, that might be putting it mildly since the ongoing series has been digging into the history of the fighting game series. The comic basically takes the NetherRealm-developed fighting game and expands the fiction by leaps and bounds, growing it into a deep and complex alternate DCU. In a pretty short period of time, it’s become almost as storied as the actually DCU, and has no shortage of fans.

The biggest difference between the Injustice U and the DCU, is the fact that Superman is not a nice man in Injustice. Forget truth, justice, and the American way, the Injustice Superman is a totalitarian monster. After Joker tricked him into murdering Lois Lane, he enslaved the globe, and only a comparatively small band of superheroes (and villains) stood against him.

In the game, the tide was turned against the rogue Man of Steel when a portal was opened between a universe that looked like the standard DCU and the Injustice universe. The Justice League (and a few others) of that world crossed over, including a ‘good’ Superman. And well, they took care of business.

Picking up the story

While sequel is on the way, continuing the tale, DC’s comic series goes the other direction. It goes back to the start and fills in what happened before the original game. With Injustice: Gods Among Us: Ground Zero though, we get something a lil’ different.

Ground Zero takes us to the start of Kal El’s regime on Earth, and tells us the story by tracing Harley Quinn’s footsteps. The book springs from the minds of Brian Buccellato and Chris Sebela, the latter a graduate of the DC Talent Development Workshop. And it sounds like it’s going to be one to watch for both fans, and those who are looking for a jumping on point.

“In GROUND ZERO, we’re trying to bridge the gap between the first INJUSTICE comic and the upcoming INJUSTICE 2 prequel comic by adapting the first videogame,” said Sebela. “I’m so excited to have Harley Quinn as our eyes and ears and heart of the book. While so much of Injustice is about larger than life figures at odds with each other, Harley’s down on the ground, dodging the fallout of all these wars, getting herself into trouble and trying to figure out how to live life post-Joker. By using Harley as our wildly unreliable narrator, we hope this book appeals to fans who’ve been reading INJUSTICE since Year One and for new readers who’ve never picked up an INJUSTICE book.”

Pretty neat. Also neat is that there’ll be a series of rotating artists, including “Pop Mhan, Daniel Sempere, and many more”, with covers delivered by Ben Oliver. 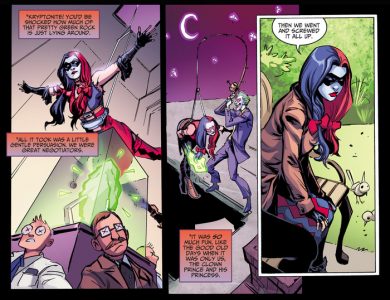 The latest in the digital first line of books, Injustice: Gods Among Us: Ground Zero is already available. You can download the first two chapters at present, and then grab a new one every Tuesday. Prefer physical comics? That’ll work too, since you can start buying the twice-monthly book starting in December.

Ready to read? You can get chapter one via the “DC App, Readdcentertainment.com, iBooks, comiXology.com, Google Play, Kindle Store, Nook Store, and iVerse ComicsPlus.” The official rundown of chapter one is below.

INJUSTICE: GODS AMONG US: GROUND ZERO #1
This new series retells the story from the first INJUSTICE: GODS AMONG US video game from the twisted perspective of Harley Quinn. Things kick off with Harley recapping the highs and lows of the previous five years. Then, determined to do her part to strike a blow against Superman’s new world order, she gathers her gang of Jokers to launch a raid on one of the Regime’s Super Pill factories.
Writers: Brian Buccellato and Christopher Sebela
Artist: Pop Mhan
Cover art by Ben Oliver

Jason's been knee deep in videogames since he was but a lad. Cutting his teeth on the pixely glory that was the Atari 2600, he's been hack'n'slashing and shoot'em'uping ever since. Mainly an FPS and action guy, Jason enjoys the occasional well crafted title from every genre.
@jason_tas
Previous Resident Evil 4-6 Surpass 1.5 Million
Next Champions #2 (Comics) Preview