4001 A.D. #4 is the finale for a series and the biggest event in Valiant comics yet, according to the description of the comic on Valiant’s website. While the gravity of that situation is definitely there, the presentation of the final issue of this epic left lots to be desired in terms of drama and impact.

A finale for the ages

The plot for 4001 A.D. #4 is a true finale and sets up a perfect entrance for the potential next series in this universe. Trying to avoid spoilers, all I can really say is that I feel like the finale will satisfy fans of the series as it stood leading up to where it is now. It is really difficult to comment on the plot, because the finale is the end. However, I can say that I really enjoyed the ending of the story. I thought that the ending was strong, and hopefully, other readers will as well. 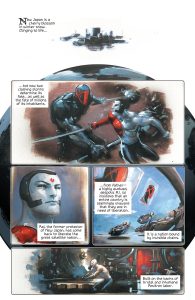 The worst part of the finale is likely the conversation. It feels adequate for what it needs to do, but it does not break any ground. While reading, I didn’t see anything I did not expect to see or anything that shook my expectations of the genre. As a die hard fan of The Walking Dead, I am pretty used to near constant tragedies, victories, or mini resets and endings, and what I saw here felt very familiar.

Communication between characters didn’t feel forced, instead, it flowed and felt good to read. I don’t have a huge background in the 4001 A.D. universe, but the characters felt as though they were likely speaking as they always have.

When I first opened the finale issue of 4001 A.D., I will admit that I strongly disliked the art style at the start, but within a few pages, the art definitely grew on me. By the end of the issue, the artwork felt natural and like it was perfectly in place.

The weakest part of the artwork is in the first few pages of the book. In these pages, the text looks almost like it is just copy and pasted in blank pieces of the art. The problem is bigger for the actual text boxes, rather than the straight text. This is a minor problem in the grand scheme of things, though, and don’t bring down the overall feeling the art conveys.

The finale for this saga is a strong finish, and fans of the series should be happy with the finish.

Erich was introduced to gaming by his grandfather before he could walk. Since then, he has grown up loving Nintendo and most games in general. He couples his love of videogames with journalism to cover news, provide reviews and tell it how it is in the gaming world.
Previous Blade Arcus from Shining: Battle Arena (PC) Review
Next Nintendo 3DS XL “Galaxy style” in stores this Week