Retro action figures are all the rage these days, and Super 7’s Street Fighter offerings should put a smile on fans faces.

Not that it was all Street Fighter at Super 7’s booth on the show floor, because MOTU was there as well. Capcom’s ubiquitous fighting game series was front and center though. This was the first time that we actually got to see painted representations of what the final figs will look like. And I have to say, they’re pretty awesome.

If you’re a fan of what the company has done with the Masters of the Universe license (and Funko’s stuff), then I have a hard time imagining you won’t like these. Sculpted to resemble 80s-era figures, and with five points of articulation, these 3.75″ toys are all kinds of cool.

The first series includes mainstays for the franchise too. Fans will find Ryu, Ken, Blanka, Zangeif, Chun Li, and M. Bison all included. The company didn’t just stop at action figures either. Printed tumblers and even MUSCLE spinoff figures are a part of this new line. It’s cool stuff that should appeal to 80s kids, and those who wish they were. 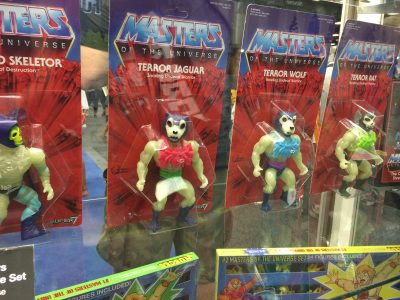 Of course, as I mentioned, MOTU was there as well. Masters had figures on display from the new animated short, as well as new MUSCLE minis. The new Hellboy figures were there too (unpainted as they might have been) and there was a big surprise too with the Alien MUSCLE figures!

All in all, it was a pretty awesome showing, especially if you like classic toys. Check out the gallery below for the visual story.

Jason's been knee deep in videogames since he was but a lad. Cutting his teeth on the pixely glory that was the Atari 2600, he's been hack'n'slashing and shoot'em'uping ever since. Mainly an FPS and action guy, Jason enjoys the occasional well crafted title from every genre.
@jason_tas
Previous SDCC 2016: Dark Horse brings Serenity back to comics
Next Kingsway West #1 (Comic) Review