The first wave of alpha tests for Cliff Bleszinski’s Boss Key Productions debut shooter LawBreakers will start today, launching on the US East Coast and US West Coast; as well as in London; Berlin; Paris and Sydney.

The game is set during a post-apocalyptic earth, altered through a global seismic event that even affected the gravity of the areas, and still welcomes player to sign up for the alpha even now. The very first map from the game, Grandview, will be featured as well as the Overcharge mode, a capture the flag gameplay mode. The Early Access version will include the new maps and modes displayed at E3, that will be added during the tests, and will be added to steam after testing finishes. 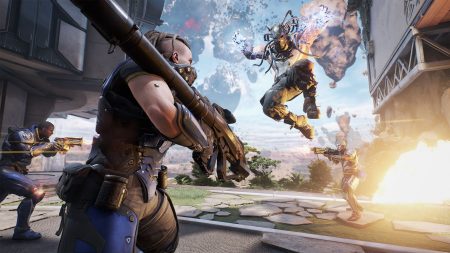 LawBreakers aims to be another addition to the role-based team shooter, a popular trend this season, and wants to bring a movement focus to its gameplay with fast-paced maps. Players can choose to be a part of the “Law” or the “Breakers”  as they battle it out in this maiden title. And in these teams, players can choose between 4 playable roles: Vanguard; Enforcer; Titan and Assassin. Each team has a different aesthetic for these roles and each role has its own movement system, as well as gravity manipulation abilities. The alpha is still open and this is certainly a game to watch in the coming months, so get signed up and start shooting with the best of them!