We all know the basic concept of hunting, right? Since the beginning of time, hunting has been pretty much the same. Man (or woman) stalks his prey, waits for the opportune moment, and then strikes. Tons of books, films and games have been made on the topic. Snore. 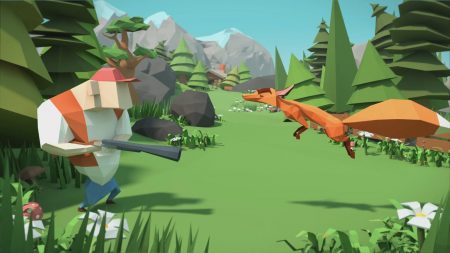 Well, welcome to Crashing Season, a closed area runner title, where you play as one of several wild animals, and it is your goal to knock out your hunters. Starting as a bear, you are run around the level, avoiding carts and pits, while being certain to knock out as many hunters as you can. These hunters drop coins, which help you further your upgrades. Wait, upgrades? For wild animals? Of course, how else is the bear or any other animal going to get better at running around on two legs, or spinning around uncontrollably. Practice leads to upgrades.

Not your usual hunting game

As you progress, you will take control of bears, moose, boar and an alligator. And that’s just until you pass the first boss! 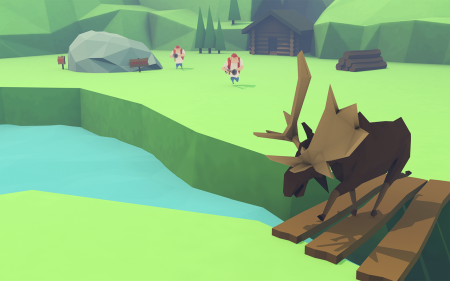 Use special moves based on snails, snakes, hedgehogs and more, as the world of wild animals takes its revenge on mankind! Goals range from lasting a certain number of seconds, to how many hunters you have to KO with a specific beast. There are 3 goals per level, and once you reach all three, you are on to the next. Sometimes, the only thing you need to do for a goal, is to spend the coins to upgrade an animal or skill. (Just stay away from the Boar’s “stinky suprise”.)

Now this is the first time I have come across a mobile game, that has a built in timer. If you know where to look, every time you finish a level or die, you can see how much time you have left to play. I believe the timer is set to 10 minutes at a time, and if you wish to play more than that, you must complete in-game purchases to aquire more game time. That being said, without the in-game purchases, you can pick up your game again after 15 minutes or so. Personally i like it this way, because I can still play a game now and again, and still accomplish the other things I have going on.

Crashing Season is a unique take on a hunting game, and as its a free download, I recommend everyone give it a shot. It won Best Art at White Nights Helsinki Indie Game Cup 2016 for its low-poly 3D art style, and it is understandable to see why. When the bear gets up on all fours, you cannot help but chuckle a bit to yourself.

Run around, take out some guys with guns, avoid the golf carts and trains, cacti and other obstacles. If you fall in the pit, not a big deal, just retry and continue on toward your goals.

Crashing Season is a free download in the App Store or at Google Play.

You can't help yourself... give it a try!

A fan of media on multiple platforms, I am always watching or playing something! Who knows what I will be on to next?
@mackeyp42
Previous Uncharted 4: A Thief’s End (PS4) Review
Next 3030 Deathwar Redux: Out of this World!