The Walking Dead Recap 612 “Not Tomorrow Yet”

This week’s episode of The Walking Dead brings us down a rabbit hole that, as viewers, we have barely scratched the surface of up until now apparently.

The episode opens with a surprisingly light scene involving Carol (Melissa McBride), interacting with residents of Alexandria in broad daylight. Later in the episode, we find that she is having some guilt over the number of deaths she is responsible for. Writing them down in a notebook while she is in beds helps the viewers to count that she has killed, for one reason or another, 18 human beings, We can tell that she is conflicted about this, but is she conflicted enough to see Morgan (Lennie James) way of not ending life?

The drama rally begins with Rick (Andrew Lincoln) addressing a group Alexandrians in the chapel. He argues that the group must deal with this threat that has been tormenting the Hilltop in order to eat. Everyone seems to agree that a preliminary strike might be needed, but Morgan stands up to ask if the idea will even work. His lonely voice is the only opposition, and so the planning begins. 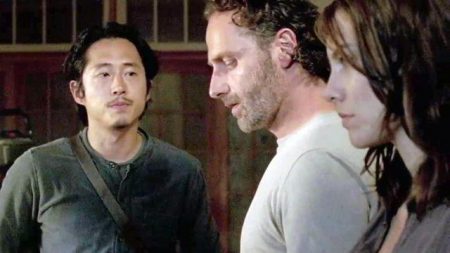 The next look we get is a look into Abraham (Michael Cudlitz) and Rosita’s (Christian Serratos) rooms. Abraham tells her that he is leaving, as in breaking up with her. When pressed for an answer, he tells her that she simply isn’t the last woman on earth anymore, then pushes past her to go to Sasha (Sonequa Martin).

The caravan loads up and, with the knowledge of one of the Hilltop responsible for the delivery to the Saviors, begins moving towards the Saviors’ encampment. The group takes a pit stop along the way to stop for several hours and look for a walker with a head similar to Gregory’s (Xander Berkeley). The group plans to get in to the Saviors camp by giving them the Hilltop leader’s head.

During the search, we focus on Glenn (Steven Yeun) and Heath (Corey Hawkins). They have a brief conversation about how neither of them want to be the ones to kill, as neither have killed a living person before.

The group leaves Maggie (Lauren Cohen) and Carol behind to guard the perimeter while they move forward to take care of business.

A little after midnight, the group rolls up to the Savior’s compound. A member from the Hilltop steps out with the head they decided to use for Gregory’s stand in. Two men come out of the compound to examine the head and send him on his way. When he goes back inside to get the captive Hilltop resident, however, Daryl (Norman Reedus) slits the remaining man’s throat. When the man with the captive comes out, Michonne (Danai Gurira) quickly dispatches him with her katana.

What follows is a brutal, systematic annihilation of the every one of the saviors. Starting while they were asleep, the Alexandrians move silently through, killing sleeping savior after sleeping savior. Glenn kills his first two humans in this intimate manner, and appears greatly troubled. One Savior wakes up, and signals the alarm, making sure that every Savior on the compound is awake.

A brief scramble, followed by a final stand in the Savior’s armory makes sure that Rick and Co. actually destroy the entire base.

Morning comes and the group is in the yard, moving to their vehicles to leave, when a Savior on a bike tears from the building’s apparent garage. He is quickly shot off of it, and during interrogation, a voice comes over his walkie talkie, telling Rick and Co. to drop their weapons. The female voice mentions that they(?) have a Maggie (Lauren Cohen) and a Carol, and that Rick should probably talk.

We are used to seeing Rick and Co. commit depraved acts in defense, but it appears here that they committed sheer murder. They didn’t give the Savior’s a way out (No that they would have taken it), or even a fair fight- butchering half of them while they slept. This really goes to show how far Rick will push his people to keep the sanctuary they have earned.

Erich was introduced to gaming by his grandfather before he could walk. Since then, he has grown up loving Nintendo and most games in general. He couples his love of videogames with journalism to cover news, provide reviews and tell it how it is in the gaming world.
Previous Brutal Roundup: 2/29 through 3/6/2016
Next Microsoft To Close Lionhead & Press Play