Spidey #1 goes back to Pete’s teenage years next month

While the main title shakes things up for the now globe-trotting web-head, Marvel Comics’ latest Spider-Man book goes back to the origins of the character for a little old school web-slinging. 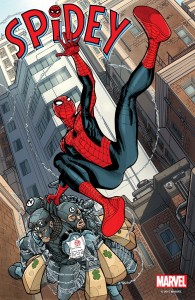 Today, he’s the world’s greatest super hero. But long before he swung from rooftops as the Amazing Spider-Man, he was a super powered teenager who knew that “with great power must also come great responsibility.” Today, Marvel is pleased to present your new look inside SPIDEY #1 – the new ongoing series from fan-favorite writer Robbie Thompson (Silk, Venom: Space Knight) and blockbuster artist Nick Bradshaw (Wolverine and the X-Men, Guardians of the Galaxy)! Class is in session as these two explosive creators take Peter back to school for a classic and iconic take on the Spider-Man mythology. Familiar faces and characters populate Peter Parker’s world as he balances his double life as high school student and the high-flying, web-swinging new hero Spider-Man!

Don’t miss one moment of the action as Thompson and Bradshaw spin a legend of their own in the bombastic debut of SPIDEY #1 – coming to comic shops and digital devices later this December!

Personally, I’ll always think of Spider-Man as a photog for the Bugle and a college student, as that’s the version of the character that I remember best. Even so though, I can totally get into what Marvel is doing here with Spidey, going back to the formative years for the hero.

This is also a chance, by the way, to see some of the most iconic of Spidey’s villains back in action again. Guys like Doc Ock might be dead and gone now, but in this comic they’re fair game, as you can see in the preview below.

Kind of excited about it really. Spidey #1 swings onto the racks on December 2nd from the team of Robbie Thompson and Nick Bradshaw.

Jason's been knee deep in videogames since he was but a lad. Cutting his teeth on the pixely glory that was the Atari 2600, he's been hack'n'slashing and shoot'em'uping ever since. Mainly an FPS and action guy, Jason enjoys the occasional well crafted title from every genre.
@jason_tas
Previous Alien: Isolation – The Collection now available on PC and consoles
Next Affordable Space Adventures Receives Affordable Update