Behemoth #2 brings us right back to the brink of Theresa’s despair in Project Behemoth. The second issue continues the plight of Theresa trying to keep control of her mind while repeatedly being forced to perform like an animal. This issue further highlights the inherent problems and issues within the top secret operation as well as the subjects’ emotional anguish and deterioration. Behemoth #2 contrasts the evils of the top secret operation against Theresa’s and her pack’s struggle to stay sane. 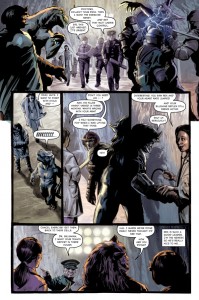 A wonderful perspective on the complexity of humanity that has been adapted to a traditional comic book narrative, Behemoth is ultimately a story of being human. Trying to maintain their humanity while being forced to run brutal gauntlets and kept obedient with electric prodding, Theresa and the rest of the pack appear to be losing the fight. The behemoths have little resources to protect them from being used and abused by their handlers. The story juxtaposes Rex and Theresa’s struggle to retain their humanity against the government’s attempt to break them down into trained deadly animals.

Seamlessly switching perspective between the subjects and the project heads, this issue’s story has a good pace and progression. Theresa’s personal story and the larger plot do not compete for importance, but work together. Author Kipiniak created characters with real depth and a story to showcase them in.

At times the story can be predictable. A top secret government project mutating humans to be monsters that requires the subjects to lose their sense of humanity, but be utterly obedient. The governmental officials are the bad guys and the human-monster subjects are the good guys (but not too good since they are monsters). We’ve all read this story before; however, this is an utter simplification of the story arc from just two issues. It is hard to predict where the story will go and Kipiniak’s writing is too good to merely dismiss as typical. Futhermore, Kipiniak directs attention not on the top secret project, but on the subjects. Behemoth is about the behemoths, not the project. 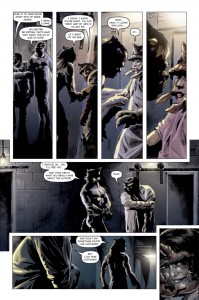 Behemoth‘s second issue art is beautifully dark and personal. Most of the panels are close-up to the characters, detailing their expressions and actions. Even the larger scenes focus on the “pack” and less of the surrounding area and people. Artist Woodward attention to the characters in paneling bolsters Kipiniak’s character driven writing.

The ambiance becomes tortured and desperate, much like the characters’ demeanor. The predominantly gray scale color palate only occasionally gets broken up by splashes of muted color. The behemoths are often half hidden in shadow, which heightens the confusion, shame, and distaste of their forms. Behemoth‘s art enhances the story’s emotion as well as strengthen the audience’s connection to the characters.

Behemoth #2 explores the remaining humanity of Theresa and her colleagues. A monster horror graphic novel that defies its genre, Behemoth emotionally hits hard and the second issue continues the punches. The characters drive the narrative and are believable even in their unbelievable world. Woodward’s art adds to the emotional intensity of the scenes and highlights the character focus.

The current plot set-up is slightly predictable; however, it is too early to tell if the predictability will continue. The character writing and art are both solid enough on their own to forgive the standard plot. Behemoth brings a new voice and perspective to the horror genre.