Marvel publishing a newspaper to keep fans up to date on Battleworld and all things Secret Wars? Sure, why not. 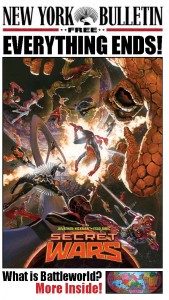 Coming this May – dispatches from the world of SECRET WARS come straight to you in this special edition of the New York Bulletin! The NEW YORK BULLETIN SECRET WARS NEWSPAPER is an actual, real newspaper featuring all the news you care about from the surface of Battleworld. New articles, new features, news from other domains – if it’s happening on Battleworld, the New York Bulletin has the scoop!

Your number one source for late-breaking news from the brink of destruction, the NEW YORK BULLETIN SECRET WARS NEWSPAPER is coming to comic shops one week before SECRET WARS #1.  From Greenland in the North to New Xandar below the Shield – our reporters have eyes and ears everywhere!

Who is the mysterious and “quiet” vigilante who leads the Inhuman rebellion? This tell-all expose will keep you up-to-date on Inhuman affairs! Homicide, mischief and mayhem! Scan the Police Blotter for a list of major crimes put to a halt by the Thors! Looking for a great vacation spot?  Don’t miss the new, expanded Travel section!

Plus, prepare for Secret Wars like never before with an exciting roadmap charting important moments, relevant stories, and can’t-miss collections to get you caught up for the highly anticipated first issue!

For all the Secret Wars news you care about – don’t miss the NEW YORK BULLETIN SECRET WARS NEWSPAPER, coming to comic shops this April!

Woo, that’s a lot of Battleworld stuck into one periodical! Then again though, Marvel kind of has to stuff this little newspaper as full as possible if they really want to keep fans as informed as they can, since Secret Wars is just about the biggest and widest-ranging crossover event that the company has had… maybe ever.

The promise of getting together all the different universes that make up the Marvel Multiverse is a daunting one. And unless you’re a fan who’s planning on getting each and every crossover book and supplement that’ll be hitting the stands this Summer, you’re going to need something to keep you in the loop as to what’s happening in terms of major events. It looks like that’s where this handy little paper will be coming in, and that’s a good deal from where I sit.

Only question- why isn’t this called the Daily Bugle? Seems like a bit of a missed opportunity to me.

Jason's been knee deep in videogames since he was but a lad. Cutting his teeth on the pixely glory that was the Atari 2600, he's been hack'n'slashing and shoot'em'uping ever since. Mainly an FPS and action guy, Jason enjoys the occasional well crafted title from every genre.
@jason_tas
Previous Massive Geometry Wars 3 update shoots up consoles starting today
Next MomoCon brings gaming giants to Atlanta this May