“Guns a blazin” isn’t even enough to describe this wacky shooter. 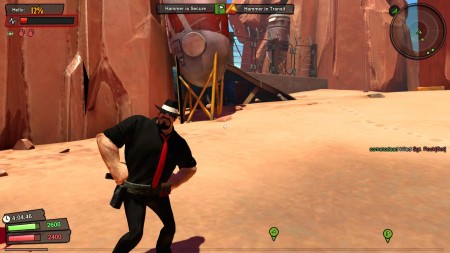 Loadout is a third-person shooter game that looks like Borderlands and plays like Mercenary Online (Or ZmR in the United States). It’s a promising free-to-play title with an in-game store, but buying anything with real-world currency is completely optional. The game is violent, loud, wacky and fun, and the amount of pop culture references will blow your mind. Literally, in this game, really.

The visuals look wonderful. I love the Borderlands-esque color palettes and how wacky everyone looks here. The locales are reasonably well made and the colors are not too distracting, which is a good thing in a fast-paced shooter like Loudout. The characters look well put together too, and quite honestly I grew to like them enough to not want to die horribly in the game. One thing I noticed about the characters design, is that the game has no problems with rendering its in-game models and action while looking smooth enough to actually be impressive.

The weapons actually look good as well, like comic book good, and that’s one of my favorite parts about Loadout. I like how wacky the weapons are and how the designers prioritized form over function. The weapon’s reliability actually rests with the player too, which is interesting, but more on that later.

While the game is fun, I have to say that the lack of maps is severely frustrating and may make it feel even more repetitive than it actually should. Granted, the game was released earlier this year, but a couple more maps and more in-game content wouldn’t hurt. Actually it should help the game grow and I feel that this is the lowest point of Loadout, though one which is easily fixable and I highly recommend doing so, Edge of Reality.

One thing that might be somewhat divisive about the game though, is its comedic (and I say this with irony) level of violence. Although this is a cartoony affair, explosions actually remove parts of the player avatar and flamethrowers roastyour character- and while some people may find this part of the game fun, I recommend keeping the kids away while the adults play.

The music in general sounds funky and upbeat and putting that in a shooter game that often makes fun of itself was a smart move and it makes for a very enjoyable experience indeed. The game features various taunts that range from John Travolta’s ‘twist’ from Pulp Fiction to the more recent ‘Gangnam Style’ by Psy, and along with those references come fun renditions by the creative team behind Loadout at developer Edge of Reality. Taunts, for me at least, are an important part of any game that demands skill and competition and the taunting mechanic in Loadout reminds me of the ‘Fame’ feature from Sony Online Entertainment’s now-cancelled Bullet Run (blanking on that one -ed).

The gameplay is straightforward in that you control 1 of 3 avatars that have no impact on the story, only because the game doesn’t really have a story per se. You shoot your way through various game modes like Jackhammer which is a variant of the traditional ‘Capture the Flag’ game mode, though of course, it comes with a twist. Instead of a flag, you try to work with your team to protect your own Jackhammer while trying to steal the opponents’ Jackhammer. Yes, I really mean a Jackhammer which can also be used to instantly kill enemies trying to take back or steal your Jackhammer. There’s also a more traditional death match mode where you work with your team to try and kill the enemies and most of this are game modes I have seen in other shooters but Loadout makes these modes their own and they have fun with it – which is a great thing. The game is highly addictive and the replayability factor is definitely strong.

The game is free-to-play, which isn’t nearly as offensive here as some might think. Although there’s an in-game cash store where players can purchase credits in exchange for real-world currency, this is purely optional. The best part about this is that, while there are some benefits to using cash, it doesn’t doesn’t really break the game for free-to-play people who want to remain so, because the game relies on skill and teamwork above all else.

One of the most enjoyable things about Loadout is the weapon customization feature where every useable part of the weapons are entirely replaceable. You want a sniper? Build your gun the way you want it to work. You want a full-auto rocket launcher? Heck, add in an infrared scope while you’re at it! The player avatars are also fully customizable from clothing to accessories to taunts – but these do cost money which has to be earned through playing through the game. Unfortunately you cannot build a character from scratch as you have to make do with the 3 currently available player avatars. But this honestly isn’t really game breaking, just something that could have made the game a little better.

The game also features an extensive skill system where the player plays through the game using various weapons, perfecting the use of said weapons, and then eventually upgrading their skills with that weapon. This enables the players to unlock more advanced modification parts for their hardware, which adds in a lot of hours in terms of gameplay.

Loadout is an extremely fun multiplayer third person shooter game, and I highly recommend it to anyone who likes team-based shooters. It’s fun, witty and violent so try to at least be 18 when you play the game, okay?