Home / News / Lords of the Fallen enters the Ancient Labyrinth

Lords of the Fallen enters the Ancient Labyrinth

A new DLC adventure is coming to CI Games’ Lords of the Fallen, chock full of new puzzles and demons to fight. 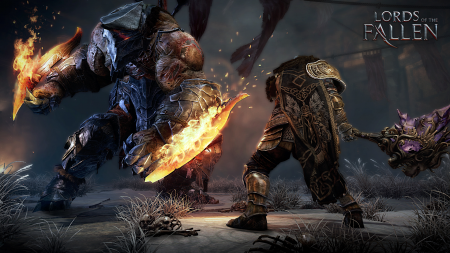 Looking to head back into the dark fantasy world of Lords of the Fallen? CI Games has you covered with an all new downloadable adventure called the Ancient Labyrinth. The expansion pack, which is being billed as a new campaign, has a new setting, new Lord (of the Fallen – natch), as well as new puzzles, and plenty of exploration.

Plenty of reasons there to dig back into this one after you cap it off, that is, if you have capped it off yet. Not the easiest game in the world, you know? Anyway, once you complete the install, you’ll be able to access the Ancient Labyrinth through a door in the main game. Exactly where that door will be, hasn’t been detailed as of yet, and we actually don’t have a release date or price tag for the pack either.

Nevertheless, you can expect to see it popping up sometime soon for the Xbox One, PS4, and PC editions of Lords of the Fallen.

Jason's been knee deep in videogames since he was but a lad. Cutting his teeth on the pixely glory that was the Atari 2600, he's been hack'n'slashing and shoot'em'uping ever since. Mainly an FPS and action guy, Jason enjoys the occasional well crafted title from every genre.
@jason_tas
Previous The Witcher 3 packs a whopping 16 DLC packs – all of them free
Next Question the Creed on the new Assassin’s Creed Rogue website