A bunch of indie gaming stars all in one game.

There are times when the elements of a game sound like a great idea, but when they come together, the whole doesn’t quite live up to the promise of it’s parts.  The latest game from Brightside Games, a platformer called ‘Team Indie’, while being a decent game, feels like it could have been so much more.

The story is pretty simple.  Your main character is Marvin the Cat, who is being by a guy sat at their computer, outside of the world of the actual game.  You’re able to run and jump and that’s it.  As you get further into the game, you find characters from various indie games who can help you on your way using their powers, such as Tim from Braid, and CommanderVideo from BIT.Trip Runner.  It’s quite an impressive roster that the developers have managed to assemble here. 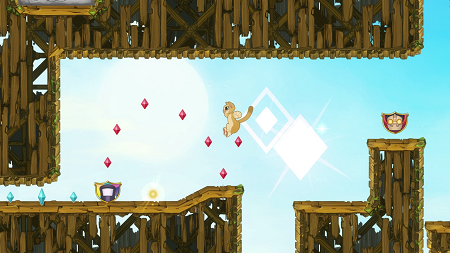 The various powers for the indie characters are what you’d expect, with J. Jitters being able to create platforms in the air, and DustGirl being able to run up walls.  You’ll activate these characters by touching their images that appear in the levels.  Then, once you’re finished what you’re supposed to do, you switch back to Marvin and continue to advance.  The trouble is that Marvin doesn’t really add much to the game in terms of puzzle solving.  You just guide him to the end once all the other characters have done their thing, making you wonder why he’s even in the game.

There’s quite a bit of trial and error involved in the game, as you figure out how best to use the characters powers to your advantage.  Timing is extremely important in this game, and you’re not always sure what’s coming ahead, so you’ll rarely get through a level first time out.  If you make a mess of things, you can rewind to the previous checkpoint in the level and continue on.  You will also automatically rewind if you fall down a hole or walk into an enemy.  The enemies aren’t hard to deal with, though.  They’re really just there to add to the puzzle element.  The first few levels of the game are pretty simple, but the difficulty quickly spikes, which makes for a frustrating experience when you’re still getting to grips with some of the other characters.  You find levels early on that feel like they should have been later in the game. 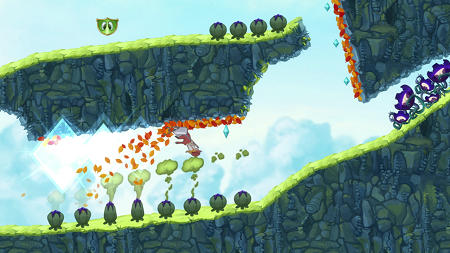 The visual style of the game is pretty unremarkable.  The backgrounds are pretty simple and samey, and the levels themselves don’t look particularly interesting.  While you can recognize the stylized versions of the various guest stars, something doesn’t seem quite right about them.  The graphical style just doesn’t fit some of them at all.  The music is nice and catchy, though, and you’ll probably be humming along with it, if you aren’t getting mad at having to redo sections of levels over and over again.

FINAL THOUGHTS
Team Indie is a game I really wanted to love.  The idea of a bunch of indie gamings best known characters working together to get through the game sounds fantastic on paper.  And certainly, it is fun for a while.  But the difficulty spikes and frustration with the gameplay stop this from being great, and the one original main character feels almost entirely unnecessary.  If you’re really excited by the idea of a big indie gaming crossover, then you’ll get some enjoyment out of this, but in all honesty, you’d be better off just checking out the characters own games.  In short, Team Indie is ambitious and exciting in theory, but in reality, just doesn’t quite live up to it’s promise.

Mike is Brutal Gamer's Indie Editor. He has been playing video games since the early 90s and is fond of racing games, puzzlers and MMOs. Typing /played while in WoW makes him cry, but not enough to stop him playing some more.
@Ognawk
Previous NYCC 2014: McFarlane Toys booth tour
Next Saturday Radar: GamesRadar’s best for the week of 10/13/14

PC gamers, get ready to return to one of the all-time classics. The demo for …