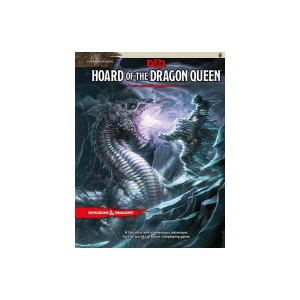 Hoard of the Dragon Queen is the newly released adventure for the Tyranny of Dragons story arc, one of two that will be released. Featuring an action packed adventure for your play group, it’s a great way to introduce new players to the game – and a nice time saver for Dungeon Masters of all levels. In Hoard of the Dragon Queen, everything is laid out for you, with plenty of room for customizing to your style of the play.

First off, it is worth mentioning that, regardless of contents, the book itself is a really nice piece. With nice thick pages printed on high quality paper that won’t rip the first time you use it, it is bound in a sturdy hardcover with the iconic artwork that Wizards of the Coast is known for. That artwork is also spread liberally throughout the book, with nearly every other page containing full color illustrations of characters and locations from the Forgotten Realms. You’ll also find a number of detailed maps of a number of the locations featured in the adventure, giving Dungeon Masters a birds’ eye view of the various areas your band of adventures will travel through.

Hoard of the Dragon Queen is meant to be a full service adventure, taking your adventurers up to level seven by the time the book is finished – but you will need a little extra resources to properly play through it, namely the Tyranny of Dragons online appendix and the basic rules. Thankfully, these are available for free download at DungeonsandDragons.com, so you don’t have to shell out more money if on manuals and such if you don’t want to. The adventure itself is laid out in a very player-friendly manner, with the format making it easy to stop for the night and pick up where you left off the next time, as well as the ability to play the many sub-missions on your own schedule.

Th Hoard of the Dragon Queen adventure is laid out in eight episodes, beginning with “Greenest in Flames” and ending at the “Castle in the Clouds”, followed by appendices that give a little more information on backgrounds, monsters, and magic items. The adventure is filled with tons of traditional encounters, as well as more social situations, giving a well rounded adventure that is exciting and well written without being overwhelming. The book uses colored boxes to highlight text meant to be read aloud. The book even allows for leveling up through milestones rather than xp (should your DM choose to do so), making for a simpler process particularly for those new to the game.

Hoard of the Dragon Queen is an action packed adventure that will keep your team of adventurers on the edge of their seats. With a well written adventure laid out in an easy to use format, it’s particularly nice for gamers who are new to the Dungeons & Dragons experience. The book itself is a high quality piece that will look equally at home on your tabletop or your coffee table. 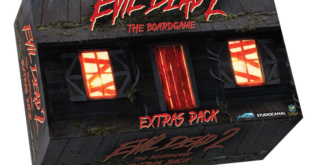 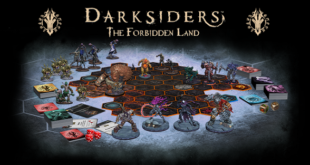 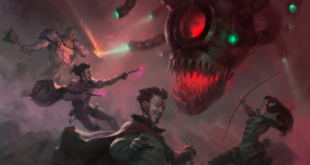 When you think of Dungeons and Dragons, you probably don’t think of Penny Arcade. But …