Edge of the Spider-Verse continues with the all-new, all-different Spider-Woman. 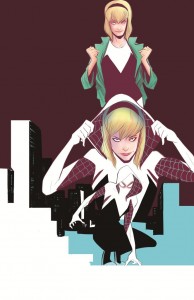 As spider-powered heroes from across all universes unite to battle back the threat of Morlun, meet a young girl from Midtown High who learned that with great power, comes great responsibility. Today, Marvel is proud to present your first look at September’sEDGE OF SPIDER-VERSE #2, from critically acclaimed writer Jason Latour and rising-star artist Robbi Rodriguez! She’s smart, she’s tough, she’s charming and she can lift a car – she’s Gwen Stacy! Patrolling the New York City of her universe, she keeps the streets safe as the vigilante known as Spider-Woman! Just don’t tell her father, NYPD Police Chief George Stacy!

“This story sees Gwen at a real crossroads of her life,” says writer Jason Latour, in aninterview with Marvel.com. “Spider-Woman is wanted for a crime she didn’t commit. So where as her life in costume before was a lot of adventuring and fun, she’s now being forced to decide what it means to her.”

As the growing threat of Spider-Verse looms on the not-so-distant-horizon, meet one of its breakout stars early as Gwen Stacy swings headlong into the biggest Spider-Man event of all time. Don’t miss one moment of the action as Gwen Stacy: Spider-Woman makes her bombastic debut in EDGE OF SPIDER-VERSE #2!

Plus, don’t miss out on these exciting Edge of Spider-Verse tie-in issues of your favorite ongoing series:

For more on Spider-Verse, visit Marvel.com and join in on the conversation on Twitter using #SpiderVerse.

Spider-Verse, as an event, is giving fans so much cool stuff. We’ve seen a Logan-tutored web-head and a Superior Spider-Man that hails from 2099, and now we get Gwen Stacy as a Spider all her own.

Fan of course, know that Stacey was Peter Parker’s gal for years before meeting her end at the hands of the Green Goblin years ago. In this alternate reality though, she was bitten by the radioactive spider instead of Pete and became Spider-Woman.

It looks like she’s got a pretty awesome little storyline and history as well, before the entrance of Morlun and his insane quest to step on every Spider in the multiverse. Whether she’ll survive the encounter or not, we don’t know, but if she does I’m pretty sure Spidey fans wouldn’t mind seeing a lot more of her down the road.

Jason's been knee deep in videogames since he was but a lad. Cutting his teeth on the pixely glory that was the Atari 2600, he's been hack'n'slashing and shoot'em'uping ever since. Mainly an FPS and action guy, Jason enjoys the occasional well crafted title from every genre.
@jason_tas
Previous Metro Redux now available on next-gen consoles and PC
Next New Mario Kart 8 DLC coming in November and May