Off from the tropics, Far Cry 4 is heading into the Himalayan mountains for more open-world action. 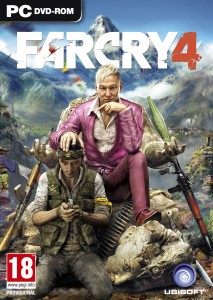 Developed by Ubisoft Montreal in collaboration with just about every other studio that the company owns (Ubisoft’s Red Storm Entertainment, Ubisoft Toronto, Ubisoft Shanghai, and Ubisoft Kiev), Far Cry 4 sends gamers on the trail of a “despotic self-appointed king.” You’ll be playing through the rugged and presumably frozen terrain of one of the biggest and most imposing mountain ranges in the world in an area of the globe called Kyrat.

“Following the success of Far Cry 3, we wanted to take the franchise to the next level and create a game that will surprise players and exceed fans’ expectations,” said Dan Hay, Executive Producer.  “Given the unique setting, we feel Far Cry® 4 will stand out as a top first-person shooter and we’re eager to reveal more about the game in the coming months.”

It definitely is a different setting for the series. All set in stand alone stories with no overlapping elements, Far Cry titles have nonetheless had one common theme- the tropics. This time around, that setting will be very different of course, though series fans shouldn’t fret about a change in overall play style as Ubisoft is promising more of the gunplay and vehicle controlling that Far Cry fans have come to expect. There’ll also be plenty of wild animals to watch out for and elements that’ll allow you to make the tale your own.

One other linking factor for this Far Cry and the rest of the series comes in the form of a returning character. If what’s a first for the series, a character from a past FC title will indeed be making a return in Far Cry 4. FC3’s Hurk and his legendary harpoon gun ‘The Impaler’ will appear in a series of three single-player pieces of story content titled Hurk’s Redemption.

The add-ons for Far Cry 4 can only be gotten (so far anyway) if you pre-order the Limited Edition of the game, which you can do right now. For more info on Far Cry 4, stay tuned; Ubisoft is promising much, much more on the game for E3.

Sure to be one of the biggest releases of this coming Autumn, November 21st in the UK, Far Cry 4 is headed to the Xbox One, Xbox 360, PS4, PS3, and Windows PC.

Jason's been knee deep in videogames since he was but a lad. Cutting his teeth on the pixely glory that was the Atari 2600, he's been hack'n'slashing and shoot'em'uping ever since. Mainly an FPS and action guy, Jason enjoys the occasional well crafted title from every genre.
@jason_tas
Previous Tango Fiesta returns gamers to the awesome 80s
Next Spidey movie Minimates swing into stores this week