Some secrets can’t be kept, and when Cap finds out what the Illuminati have been up to he’s going to be on a collision course with none other than shell head himself- Iron Man. 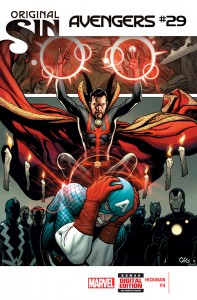 This May, the collision of the Avengers and New Avengers is imminent as untold treacheries come finally come to light. Marvel is proud to present your first look at AVENGERS #29 – an Original Sin tie-in, from the New York Times No. 1 Bestselling Creative Team of Jonathan Hickman and Leinil Yu!

To stop multiversal armageddon the Illuminati, a secret cabal of the Marvel Universe’s greatest minds, had to do the unthinkable. To save a universe, Iron Man, Dr. Strange, Mr. Fantastic, the Black Panther, Namor, The Beast and Black Bolt were forced to assemble the most terrifying weapon in the known universe – the INFINITY GAUNTLET!

To protect their secret, they tampered with the memories of Captain America – erasing his knowledge of their terrible acts. But no secret stays buried forever. And Steve Rogers is about to discover the betrayal of his closest allies.

Information held by the all-seeing Watcher has restored Steve Rogers memories – and the Illuminati’s days are numbered. What unfathomable secrets have Tony Stark and his inner circle been keeping? What will happen when the Marvel Universe at large discovers their treachery? Steve Rogers and Tony Stark are on a dangerous collision course – and before it’s over, only one of them will be left standing.

The Earth-shattering clash of the Avengers and New Avengers is upon us, and it all starts here! But when the dust clears, is there still a world worth fighting for? Find out as Earth’s Mightiest are thrust headlong into Original Sin this May in AVENGERS #29!

There are a number of sub-threads in the Original Sin crossover, but this one might have the biggest potential and be the most Universe shattering. Cap and Tony haven’t seen eye to eye before after all and this latest transgression, aided by the rest of the shadowy group that Stark belongs to, juts might be too much for the two Avengers to get over.

I was kind of wondering what happened to the Illuminati anyway, as it seemed like after World War Hulk they just kind of disappeared. Original Sin brings them back in a big way and shows what the group has done to shape and alter the landscape of the Marvel U over the years. Tossing the Infinity Gauntlet into the mix? That’s a recipe for disaster- and one angry Captain America.

Avengers #29 arrives from the team of Jonathan Hickman and Leinil Yu on May 14th.

Jason's been knee deep in videogames since he was but a lad. Cutting his teeth on the pixely glory that was the Atari 2600, he's been hack'n'slashing and shoot'em'uping ever since. Mainly an FPS and action guy, Jason enjoys the occasional well crafted title from every genre.
@jason_tas
Previous Risen 3 CGI trailer rises to take up arms
Next The Walking Dead Season 2 coming to Vita next week, Android platforms soon