Dark Horse Comics’ newest horror anthology weaves 16 tales of terror in a collection that could only be called a Nightmare Carnival. 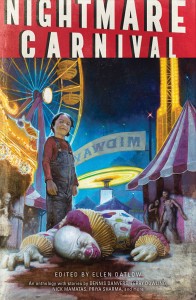 A washed-up wrestler goes toe to toe with a strange new foe. A young lad’s eleventh birthday heralds the arrival of his bizarre new entourage. A suicidal diva just can’t seem to die. All of these queer marvels and more can be found at the Nightmare Carnival!

The publisher is making something of a habit of reviving the horror comic genre all by itself as of late and here we are with another anthology of stories that’ll give you a shiver.

Catch it on the racks on September 24th  in comic shops and on October 7th in bookstores.

Jason's been knee deep in videogames since he was but a lad. Cutting his teeth on the pixely glory that was the Atari 2600, he's been hack'n'slashing and shoot'em'uping ever since. Mainly an FPS and action guy, Jason enjoys the occasional well crafted title from every genre.
@jason_tas
Previous The Kingpin of crime revealed in The Amazing Spider-Man 2
Next The Elder Scrolls Online (PC) Review