We played the upcoming Lords of Shadow sequel to see how Dracula manages un-life in the 21st century and chatted a bit with the series producer, Dave Cox. 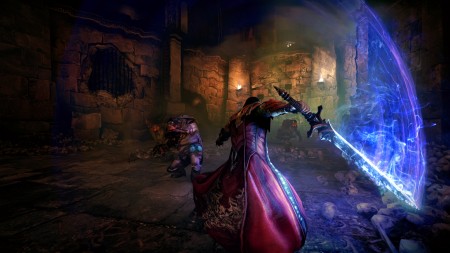 As you’ll see, things are a bit different this time around as you’ll actually be playing as Gabriel Belmont who’s already become Dracula. Also different is the setting, which is the modern world, with Dracula’s castle lurking just under the edges of human reality.

Existing as a kind of dual-location world, Dracula’s famous castle has been incorporated into and buried under what’s very much a modern European city. According to Cox, the flow of the two areas won’t feel all that separate though as the world above and the world below bleed into one another and, at least after one pivotal story point fairly early on, become one world that you as Drac can freely explore as you see fit.

After this section that I mentioned above, you’ll actually have a medallion that will allow you to quick-travel around and you can choose to proceed on your quest (which is kind of the point of the game, isn’t it?) or head back into Castlevania and explore. Cox says there’ll be plenty of cool stuff to find in there too and it should keep players busy all by itself for a while. 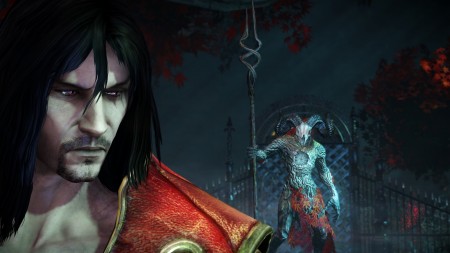 This is great news of course for anyone who might have been afraid that having a ‘modern’ cityscape (and it’s not a real city by the way, though it is based on Madrid and London in some ways) might dilute some of the most fun parts of what makes Castlevania… well, Castlevania. So LoS2 will straddle that line of exploration and linearity so gamers can travel freely (pretty much anyway) within the game’s world if they like, or head right through the campaign and see what happens- or a mix of the two as I imagine most players will take it. Cox says that change in particular (meaning more exploration) from the first game was a direct reaction to the input from the fans. See, your opinion matters.

Playing as Dracula will also be both a little on the new side and a little of what you’d expect from the Castlevania version of the famous vampire lord. You’ll get to see the familiar fireballs and mist abilities that you might expect him to wield (albeit in new ways), but you’ll also get to possess your foes, freeze them in their track with the deadly Void Sword and actually transform into a “pack of rats” which seriously struck me as awesome as it comes right from vampire lore in general. Oh, also cool? Dracula can transform into a dragon.

Dragon form is meant to very much be a game changer and isn’t the easiest thing to achieve. Cox describes the process as a kind of side-quest all its own where you’ll have to collect dragon scales and then save them up for moments where Dracula might need little dragon-powered boost, like in the boss battles. The Dragon Form will be absolutely massive too and is meant to be an awe-spiring moment when you finally do transform. Although, it’s hard to imagine a time when turning into a three story tall, fire-breathing beast wouldn’t be impressive.

For those thinking that Dracula as a main character (in full vamp mode) might make him a hero, you’ve got anther thing coming. There are some extremely… morally bankrupt things that Gabriel, now one of the most evil creatures in the world, does in Lords of Shadows 2. That’s just the way MercurySteam wants it says Cox, as it was important to never really let Dracula behave like he’s a hero. Without spoiling anything, the game starts off with a massive battle (which you can see in the demo that’s available now) and then, just after you’ve tasted the character at his toughest and baddest, crashes into the modern age where he stoops to terrible lows simply to survive- and more than just that, doesn’t care that he’s doing any of it. Not a good guy by any means.

It’s sobering to see and play these segments and Cox says that “surprising people” is something that the folks at MercurySteam very much like to do. He himself sees their version of Drac as a kind of Tony Soprano where you root for him, you want him to win, but at the same time he’s reprehensible and gives moment for pause quite often. Shaking the player and making them see that, not that the vampire sees himself as evil, but Dracula is indeed a bad guy. That’s something that you can expect regularly from LoS2 by the way. 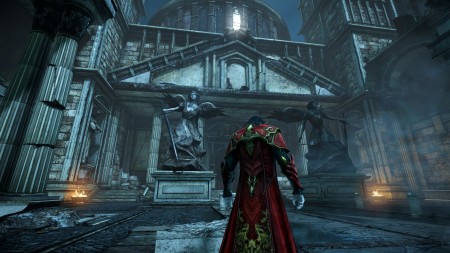 It was important that Dracula be a “real” character who players could sympathize with and really view as multidimensional instead of the stiff representations that we’ve seen in the past. Part of that ‘humanness’ if you will, is Alucard and his interactions with his father. Gabriel’s son will appear throughout LoS2 and is a very important character to the campaign, as is the entire cast as the game is, at its core, all about Dracula’s relationships and his mind as well as the journey within. That’s a very interesting thought for a game about a character who’s more often than not seen as a somewhat ‘silly’ archetype.

And for anyone thinking that the series will continue past Lords of Shadow 2 despite it being touted as the capper on Dracula’s adventures, you couldn’t be more wrong… at least from MercurySteam’s perspective. Cox says that they were very clear with Konami when they started work on the first LoS in that they had a distinct vision of a beginning and an ending for the story that they wanted to tell. Though he admits that once they’re done with LoS2 Konami can do whatever they like with the narrative (continue, go back to the original series, create something new), MercurySteam’s storyline will indeed be complete by the time the credits roll on Castlevania: Lords of Shadow 2.

With a story this rich, and a series of games that redefined a classic series in the way that Lords of Shadow has, I’ll personally be sorry to see it end- but it was quite the ride while it lasted wasn’t it?

Castlevania: Lords of Shadow 2 lands on the Xbox 360, PS3 and PC this February the 25th from Konami and MercurySteam.

Jason's been knee deep in videogames since he was but a lad. Cutting his teeth on the pixely glory that was the Atari 2600, he's been hack'n'slashing and shoot'em'uping ever since. Mainly an FPS and action guy, Jason enjoys the occasional well crafted title from every genre.
@jason_tas
Previous Toy Fair ’14: Capo Toys enters the arena with all-new Street Fighter figures
Next Toy Fair ’14: Square Enix readies new RoboCop, DC Comics, Titanfall and more