One of the best shooters of the 1990’s and one of the weirdest indies hits of today are now on GOG. 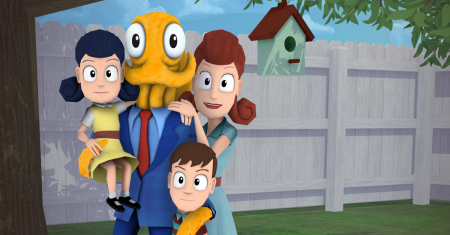 The main theme of the game is doing extremely simple tasks. But again, when you’re an octopus dressed in a business suit, even the simplest stuff becomes a massive challenge.

The other big release this week on GOG is none other than SiN Gold. I remember SiN really well from when it first hit the PC back in the heyday for FPS’ that was the late ’90s. Based on the Quake 2 engine (blast from the past!), SiN had a terrific level of interactivity and some great action all wrapped around a memorable cast of characters (some more than others *ahem) and a pretty good storyline.

SiN was actually remade not all that many years ago in the Source engine as a proposed episodic game, but never made it past episode 1. It just didn’t have the ‘it’ that the original had- which really, if you’re looking for a fun old school shooter, this is it. As a bonus, the version posted on GOG includes the Wages of SiN expansion pack and is actually fully patched, so it features none of the aggravating glitchiness of the initial release.

SiN Gold will cost you $9.99 USD on GOG, while Octodad: Dadliest Catch will run you $11.99 USD as a special price for the first week of the game’s release- that’s 20% off what’ll be the usual asking price.

Jason's been knee deep in videogames since he was but a lad. Cutting his teeth on the pixely glory that was the Atari 2600, he's been hack'n'slashing and shoot'em'uping ever since. Mainly an FPS and action guy, Jason enjoys the occasional well crafted title from every genre.
@jason_tas
Previous Feature Friday: You Don’t Have To Worry About Nintendo…They’re Not!
Next Disney Kingdoms: Seekers of the Weird #2 (Comics) Preview