Valiant’s darkest hero plunges deeper into the dark side and closer to the all-new arc that debuts in issue #13. 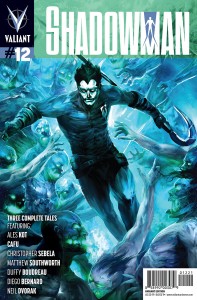 Shadowman is very much a book and a character that’s in transition right now as we head into issue #12. Up until now, Jack Boniface has thought certain things about himself, the deadside and the Shadowman-empowering Loa to be true. We’ve found out recently that all may not be as it appears to be though since the book will be taking a much darker turn next month and Jack might not like what he’s become for too much longer.

Before we get there though, Shadowman #12 will be pushing things even more towards the next level in the tale of Shadowman with an all-star issue of sorts that breaks the narrative up into three different stories. It’s a pretty cool idea that’s actually a perfect ‘jumping on’ for folks who haven’t tried Shadowman and his particular brand of super-heroics and horror as of yet.

You can grab Shadowman #12 when it hits stands this week- on November 6th. And don’t forget the all important issue #13, which’ll be arriving next month.

Jason's been knee deep in videogames since he was but a lad. Cutting his teeth on the pixely glory that was the Atari 2600, he's been hack'n'slashing and shoot'em'uping ever since. Mainly an FPS and action guy, Jason enjoys the occasional well crafted title from every genre.
@jason_tas
Previous 5 new shows debut on Nintendo Video
Next The 7th Guest 3 is official, on Kickstarter now