The fallout from Harbinger Wars gets strange as reality itself unravels and the Renegades find out that the battle with Harada was bigger than even they realized. 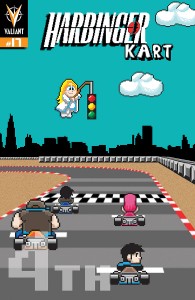 Ten days ago, Peter Stanchek and the Renegades barely escaped the clutches of Toyo Harada in the epic final battle of the Harbinger Wars…or so they think. As reality unravels, Valiant’s teenage superteam is about to discover the true extent of the collateral damage from the summer’s blockbuster crossover event – and just what they sacrificed to make it out alive.

Meanwhile, an unforeseen threat to Toyo Harada’s empire lies dormant deep within the walls of Harada’s own fortified prison facility. Meet Monica Jim – aka Animalia – another survivor of the three-way conflagration that decimated the Vegas Strip and a fellow P.O.W. inside the Harbinger Foundation. Just how does she factor into the Renagades’ “Perfect Day”? And could this savagely dangerous child be their only hope of escape from a perfectly designed prison of the mind?

Harbinger has become one of the biggest and best books in the Valiant canon- especially as of late with this past Summer’s massive Harbinger Wars event tying together the Harbinger and Bloodshot storylines and introducing all kind of new characters and motivations.

Now that things are seemingly over, and Toyo Harada (one of Valiant’s biggest threats) is branching out into Eternal Warrior and X-O Manowar territory, but his influence is still very much the overarching force in Harbinger. Harbinger #17 focuses on a “prison of the mind” as Valiant says, and promises to reveal what actually happened in Vegas- the outcome of which is still more than a little hazy.

Get ready for a mind-bending trip through the old noggin when Harbinger #17 lands on store shelves this week- on October 23rd.

Jason's been knee deep in videogames since he was but a lad. Cutting his teeth on the pixely glory that was the Atari 2600, he's been hack'n'slashing and shoot'em'uping ever since. Mainly an FPS and action guy, Jason enjoys the occasional well crafted title from every genre.
@jason_tas
Previous WWE 2K14 DLC and Season Pass announced
Next Almost 20 minutes of Arkham Origins footage shown in new featurette