As someone that’s never played Payday: The heist, I wasn’t too sure what to expect when I was invited to play Payday 2, so was I disappointed or pleasantly surprised? 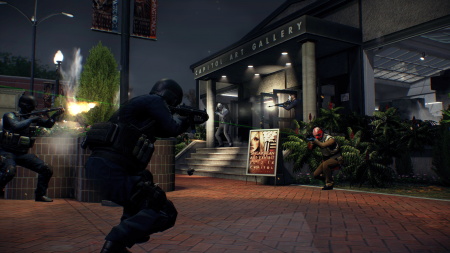 Let me begin by saying that I was fortunate enough to have the opportunity to play both the PC and Xbox 360 versions of PayDay 2 and I know it’s the most obvious thing to say about FPS games, but the PC version was far superior in terms of having a much smoother frame-rate, better graphics, and far superior controls. I’ve always felt shooter games should always be controlled using mouse and keyboard, playing it on the Xbox using a gamepad just felt really awkward and clunky for me.

Let me explain the reasoning behind this, using the mouse to aim with is much easier and more effective than using an analog stick, then there’s the layout of the keyboard, which, in my opinion anyone can easily get used to, but when using the controller I found myself crouching when trying to reload, and running when trying to aim. You can only imagine the kind of problems this caused.

For those of you that played the first game in the series, you will already know that this is a cooperative first-person shooter where you must pull off a heist in a group of four. Sound easy? Then you’re WRONG, why? because of the keyword “cooperative”. That’s right, you must learn to work together as a team with the other robbers in order to complete missions and not do what I did, which is running in head first like a numbskull all guns blazing. Before the missions started my teammates decided to survey the area; on the other hand, I decided to put on my mask and equip my weapon, which caused panic and in turn, the ensuing chaos caused the authorities to be alerted. You can guess for yourselves how that mission ended.

There are different traits introduced for each robber, so you have the enforcer, who is the muscles of the group and uses brute force to do more damage. He also has huge armour, a bigger drill saw, and some very large ammo bags. There’s the mastermind, who is the leader (think Robert De Niro in Heat) and can manipulate situations to turn them in your favour by making the cops fight each other, or having hostages and civilians help you. Then there’s the technician, he makes full use of gadgets, can place C4 explosives on doors to blow them up instead of drilling, or (if you choose the other option) he can even drill and restart a lot quicker than anyone else. Finally there’s the ghost, who makes use of stealth. He uses ECM to disable cameras, pick safes, and he can body bag corpses.

More RPG elements are introduced in this game such as the skill tree, which can be used to increase the abilities of the traits mentioned above by adding skill points, or you could choose to distribute the points more evenly if you wish to be well-rounded. More upgrades are available using the economy system where you use cash to customize weapons. You can change the grip or the scope and even make the weapons more powerful. Also available for customisation are masks, letting you change masks and the colour if you’re not satisfied with the current look. Skill points and cash are obtained by completing missions.

Crime Net is a feature which allows you to choose missions that appear on the map in various different locations, at the beginning you are presented with fairly easy missions, but as you make progress and increase your level, each mission becomes more challenging. In the video below, lead designer and game director, David Goldfarb gives a more detailed explanation.

After getting hands on with the game, I had the pleasure of speaking to one of Overkill Software’s QA testers Andreas Hall-Penninger (really cool guy by the way.) Here’s what we discussed broken down into bullets (fitting, no?) as we got tangled into a pretty deep conversation that sort of defies standard question/answer routines.

How did David Goldfarb get involved in this game, having previously worked on titles like Battlefield 3 and Battlefield: Bad Company 2?

Apparently, David had approached Overkill Software, as he had been interested in making a game about bank robberies and heists.

What skills are required to be good at PayDay 2 and get the most out of it?

Well, it’s kind of obvious that you have to be really good at co-op as you have to work together in order to successfully complete each mission. You also should be good at FPS games, although you don’t necessarily have to be great at FPS as it’s more about improving as you gain more experience while playing it.

Is it necessary to play PayDay: The Heist before playing the second game?

No, as the game has no real narrative or storyline you don’t have to play the first game, so you can jump straight into PayDay 2 without feeling like you missed anything.

What was the reason behind PayDay 2 getting a physical release after first one was digital only?

Well the main reason is because PayDay 2 is too big to have a release on XBLA or PSN, although it will still get a digital release via Steam.

If this game had similar funding as a “AAA” blockbuster title, would anything have been done differently?

There are still plenty of ideas and plans that weren’t put in to the final product, which too much can’t be said about.

Does this mean that there could potentially be a PayDay 3?

Andreas refused to comment on this, simply stating that he couldn’t say anything on that particular matter, although I did try pushing, he wouldn’t budge.

All in all, PayDay 2 is shaping up to be a great time and offers way more than your average first-person shooter does. There’s planning, teamwork and patience to be had here if you want to succeed and pull off your heists as cleanly as possible.

PayDay 2 is due for release in August for Xbox 360, Playstation 3, and Microsoft Windows.

I've been a gamer since I was a child (which is going way back when) the very first console I owned was the Sega Master System, during my time as a gamer I have pretty much come across nearly every console including the Bally Astrocade(which requiered cassette tapes to play games) so I have broad range of knowledge when it comes to video games. My favourite game of all time is between Shadow Hearts (a rare gem of an RPG released for the Playstation 2) and Final Fantasy VIII.
Previous SDCC: Konami announces exclusive items on sale
Next SDCC: Star Trek Into Darkness Blu Ray detailed