Diamond Select Toys’ Battle Beasts are making a return trip to the SDCC for 2013 with a brand new exclusive giveaway item and a look at series 2. 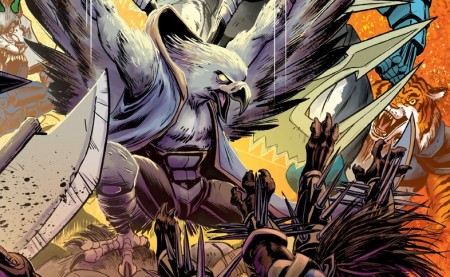 Battle Beasts have done pretty well for themselves since debuting at the Con in 2012. Diamond is actually prepping not only a second set of Minimates for the franchise, but also a comic book sequel to the hit first miniseries. Series two of the figures will be on display at DST’s booth on the show floor in prototype form and there’ll be a special panel discussion about the line where fans can find out what’s next for the fighting beasties.

Fans can also snag a very cool giveaway item in the for of Shadow Merk. The ‘shadow’ variant of the falcon-like hero of the comic series is cast in translucent purple plastic and actually looks really cool. He’s also going to be super limited with a set number of them to be given away at the start of each day of the show (except on Preview Night)- so you might want to get to Diamond’s booth first when those doors open.

Diamond Select (and Merk) will be at booth #2607. If you’re looking to sit in on the panel presentation, that’ll be in room #8 at 1:30pm on Saturday afternoon.

Jason's been knee deep in videogames since he was but a lad. Cutting his teeth on the pixely glory that was the Atari 2600, he's been hack'n'slashing and shoot'em'uping ever since. Mainly an FPS and action guy, Jason enjoys the occasional well crafted title from every genre.
@jason_tas
Previous Activision and Target team up for Skylanders Swap Force
Next MoMA expands gaming collection