A look at one of the few “major” games at the show. 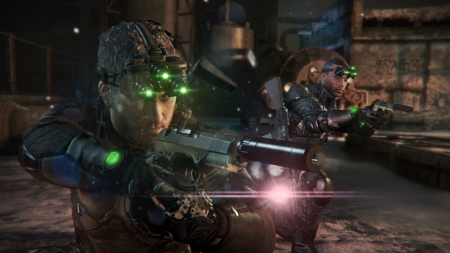 While the focus at Rezzed was mostly on Indie gaming, tucked away in the corner was the latest game in Ubisoft’s Splinter Cell franchise, Blacklist.  It’s been three years since we last saw Sam Fisher, and it’s good to be back in his suit.  As it were.

The mission I played through involved rescuing Andriy Kobin, who has been captured and is being tortured for information, so you have to get into the police station he’s being held at and rescue him to get some information yourself.  The first thing that becomes clear once you start is that the monochrome visual style of Conviction has gone, for better or worse.  The clues appearing on the walls was also not present in the demo, although at the start of the mission, you see videos of your team briefing you on the walls as Fisher is assessing the situation.

The gameplay is very similar to Conviction, and several features have carried over.  The visual clue of where the enemies last saw Fisher is there, and it’s still enjoyable to sneak around to the side and take out an enemy as they’re firing at your last known location.  The ‘Mark & Execute’ feature is also in again, allowing you to mark a couple of targets from behind cover and take them out in one swift movement.  Although the AI didn’t seem to be the most accurate or intelligent most of the time, but that may have been a difficulty issue. 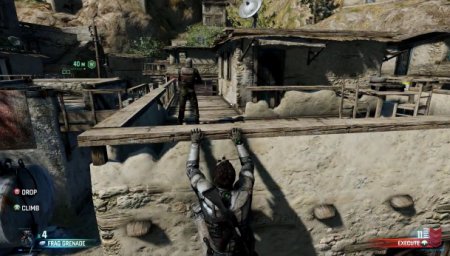 Traversing the building rooftops and balconies while trying to avoid detection was enjoyable.  You could go in all guns blazing if you wish, but you’ll make things easier on yourself if you take the stealthy approach and try to take people out quietly.  There is supposed to me a new ‘killing in motion’ mechanic in the game, but I never got to see it in action.

The second part of the demo was more difficult, as you have to drag Kobin to the extraction point without him dying or without dying.  However, holding Kobin means you can’t make use of the cover mechanic, so you have to just park yourself behind cover and pop up and shoot when you can.  It adds a bit more challenge to proceedings.  Once Kobin is in the area of extraction, you have to defend him in a room until it’s safe to escape.

Blacklist certainly looks stunning, the voice acting is decent and the game itself seems to be a lot more enjoyable than Convinction was, so I’m certainly looking forward to it.

Mike is Brutal Gamer's Indie Editor. He has been playing video games since the early 90s and is fond of racing games, puzzlers and MMOs. Typing /played while in WoW makes him cry, but not enough to stop him playing some more.
@Ognawk
Previous Doodle Jump (Xbox 360) Preview
Next The Replacers return for Black Ops II Vengeance