The original Xbox game is getting an HD overhaul. 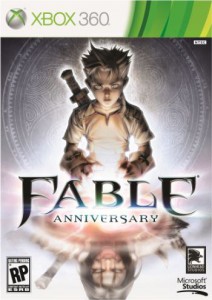 Microsoft have confirmed that Lionhead Studios are working on an HD remake of the original Fable game that was released on the original Xbox back in 2004.  Entitled ‘Fable Anniversary’, it will contain The Lost Chapters, new Achievements, SmartGlass integration, leaderboards, a new UI and a full update to HD graphics.

There will be updated textures, models, effects and a new save system.  Lead designer Ted Timmins described ot as “The game that Fable fans have been demanding for years.” The new acheivements will add something new to the game. “Fable has always been about choice and consequence, so we’re trying to put that into our Achievements.”

A teaser was released which you can see below.

Mike is Brutal Gamer's Indie Editor. He has been playing video games since the early 90s and is fond of racing games, puzzlers and MMOs. Typing /played while in WoW makes him cry, but not enough to stop him playing some more.
@Ognawk
Previous E3: Call of Duty: Ghosts All-Access Special
Next Project x Zone demo available in North America