Namco Bandai recently released a demo for the game Project x Zone on the 3DS eshop. 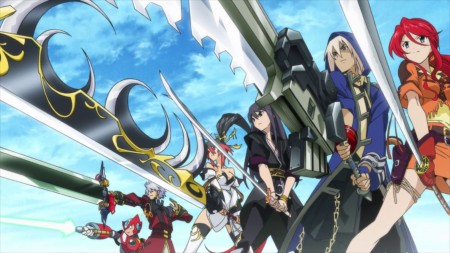 The demo features characters from several different games, such as Sakura Wars, Valkyria Chronicles, Street Fighter, and Space Channel 5. They are pitted against various monsters on a large grid, including a villain from Sakura Wars named Ayame. You can control two characters from the same universe at once, with support units that can occasionally attack as well. Sega‘s own Ulala for example is a support unit, and can be used in battle when you activate her special attack. The special attack animations are really neat, as they show the character up close to the screen before they initiate a devastating blow to their enemies.

You can initiate a battle by moving your character on the map’s grid over to a space occupied by a monster. Once you confirm that you wish to attack, all hell breaks loose in the actual battle. You can perform a lot of different moves on monsters in a single battle, and often times you’re literally juggling them in the air for long periods of time by using a combination of your regular attacks and the abilities of your allies. It didn’t take long to figure out how the game worked, and once you get the hang of it, it’s kind of fun watching all the hectic action on screen.

The dialogue was also quite charming; seeing characters from different universes interacting with each other was both funny and a fan’s dream come true. I couldn’t help but smile when I saw Devilotte arguing with both Ryu and Ken. Characters also have dialogue before and after battle sequences, sometimes just generic quips like Ryu talking about martial arts, as well as interaction between their allies.

From what has been shown so far, it appears as though Project x Zone is quite a charming and fun crossover SRPG. Monolith Soft and Banpresto seemed to have put a lot of love and time into it. If the demo is any indication, players will be in for quite a treat in a few weeks to come.

Project x Zone will be available for the 3DS on June 25th in North America and July 5th in Europe.

Well, my name's Christopher Deleanides as you all know and I'm the Nintendo Editor here at BG. I've been playing video games since 1992, and I've been a Nintendo fan the entirety of those years. My love for video games as well as Nintendo hasn't changed, and probably never will. The only thing that comes close is politics, as I'm very deeply involved in both local and international issues.
Previous Microsoft Confirms Fable Anniversary
Next Saint’s Row IV gets some special edition Wub… Wub