One of the more elaborate special editions we’ve seen in a while is available now for preorder online.

If you’re a big fan of the Dead Space series, or just a collector of awesome looking special editions of games, you’re probably not going to want to miss this one. 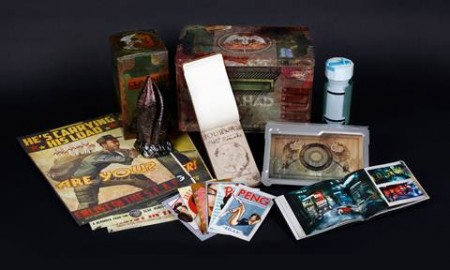 The Dev Team edition of Dead Space 3 sees EA and Visceral Games teaming with Treehouse Brand Stores to produce one very impressive collector’s edition. The Dev (as in ‘development’) Team edition of DS3 (which is actually available with or without a copy of the game) loads up an art book, a ‘journal’, a replica marker, and a lot more into one very cool looking collector’s tin.

“We’re super excited to team-up with Treehouse and make something extra special for gamers that have been supporting us since the first Dead Space game,” says Steve Papoutsis, VP and GM of Visceral Games. “We, as a development team, really wanted to put our personal touch on these exclusive items so that they feel authentic and meaningful to our passionate fan base.”

With all that, you might be expecting a monster of a price tag too, but it’s actually not all that expensive. Including a copy of Dead Space 3 with the package of goodies, the Dev Team edition will run you $160 USD (North America only). Buying one sans game means you’re looking at just $100 USD, which is basically just subtracting out the cost of the game from the pack.

Off the top of my head, I can think of a pile of other CE’s and SE’s (or whatever else you might want to call them) that cost more (in some cases a lot more) and gave the buyer less to play around with. Overall, if you’re a big Dead Space fan, there’s a lot to like with the Dev Team Edition. And if you want in on a Dead Space 3 Dev Team edition, you need simply click here and head to the official page for the game. There you can order up your flavor of choice.

Jason's been knee deep in videogames since he was but a lad. Cutting his teeth on the pixely glory that was the Atari 2600, he's been hack'n'slashing and shoot'em'uping ever since. Mainly an FPS and action guy, Jason enjoys the occasional well crafted title from every genre.
@jason_tas
Previous Star Wars #1 (comics) review
Next Star Wars #1 sells out in just a day