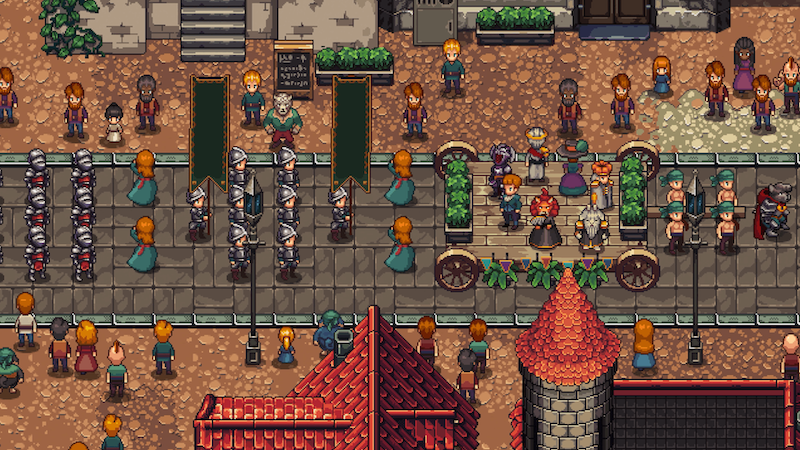 Turn the clock back RPG fans, all the way back to the 90s. Matthias Linda and Deck13 Spotlight’s incredible JRPG Chained Echoes is a ‘retro’ gem.

It’s been a while, but it seems as though the JRPG genre is ever-so-slowly re-adopting its former glory. That might seem like a strange statement to some reading this, since Japanese Role-Playing Games have pretty much always been a pretty big genre.

But for those fans who prefer the genre as it was, say on an SNES or PSOne, today’s games just aren’t the same. Pretty much gone are the cute sprites of the past, as well as the traditional gameplay. Well, it was gone anyway.

In the last few years, we’ve seen the arrival of games like Octopath Traveler and its sequel. Those are JRPG’s embraced the past, while serving up modern, lavish takes on legacy visuals.

Chained Echoes, from indie developer Matthias Linda and publisher Deck13 Spotlight, is a game along those lines. It features visuals that are decidedly terrific, though rooted in the past. And that’s not all, as Chained Echoes completes the package with top notch… everything, including some of the best writing in an RPG that I’ve ever seen.

If you love the genre as it was, keep reading.

Chained Echoes’ story is a familiar one. At least, it starts out familiar. As I mentioned, the game has a pretty great script, and that extends to the story itself, which is probably much more of a mature one than you might be used to. I don’t mean blood and guts and nudity either. I mean actually mature.

Yes, there are jokes and lighthearted moments aplenty, it kind of wouldn’t be a JRPG without ’em. But Chained Echoes weaves a story of war and nations in conflict, as well as personal tales for almost all of its cast. And man, does it do it well. The continent of Valandis is at war, and has been for some time. Mercenaries, using massive mech-suits, strike at the enemy and hope to bring peace back to the kingdoms. Or… do they?

One of the things that you’ll learn really fast about Chined Echoes is that the story isn’t straightforward. The game twists and turns, and is loaded with surprising moments, dangerous characters, and scheming elite.

Maybe it’s just that I haven’t played a JRPG in a while, but there’s so much happening that I would routinely forget story points, only to be reminded when I least expected it (and that’s not a complaint). And on top of that, choices actually matter. You’ll encounter many instances of optionally helping someone out only to run into them again. And sometimes that can seriously pay off.

And don’t forget that I mentioned mechs. Now don’t worry, this is still a fantasy tale, as there’s plenty of swordplay and magic as well. But the game combines fantasy and steampunk in a way that feels extremely natural. And yes, that includes piloting some big, bad robo-suits.

So Chained Echoes looks like a classic JRPG. But as any player of the legacy-genre can tell you, half the equation is the gameplay. JRPG’s typically (though not universally) feature turn-based fights and the oft-infuriating ‘random battles’.

For it’s part, CE flips the script just a little, starring the former yet smartly eschewing he latter. I’m sure there are some out there who are into random encounters, but the mechanic has always driven me up a wall, and I’m thrilled to say that this is one role-player that ditched it.

Basically, you’ll always (well, almost) be able to see your enemies before you engage. And more often than not, you can skip a fight if you don’t feel like scrapping or just want to get to your destination. That’s a barter though, since although you can avoid a fight for sure, you still need to level-up.

If you don’t get stronger and tougher by fighting lower-level enemies, you won’t put up much of a struggle deeper into the proceedings. Items and weapons, and there are plenty of both, can only do so much after all.

And as mentioned, once you dig into one of those combat situations, it’ll be in turn-based in form. If you’ve played JRPGs before, you know what to expect. You’ll issue orders to your party members, including initiating attacks, magic/special moves, using items, and rocking super-moves (that you have to build towards but are also ready at the top of every fight).

Other than the standard stuff though, Chained Echoes also adds in a totally new mechanic called Overdrive. This is more or less a ‘groove’ that you have to get into while fighting. If all you do is attack, you’ll ‘overheat’ and have to cool down with a defensive stance(s).

This can honestly be a little frustrating in battle, since your characters do less damage and take more while not in Overdrive. While I still don’t think it was completely necessary, it’s also not the end of the world. And managing it actually does add additional strategy to what otherwise would be some extremely typical role-playing fights.

It’s hard not to be impressed by what Matthias Linda has accomplished with Chained Echoes. Earlier I mentioned how much Chained Echoes pays homage to generations-past, and it does so in flat-out gorgeous fashion.

Spanning locales from cities to towns to forests and ancient ruins, the game’s world is massively detailed. I mean that in more ways than the overall graphics package too, as it’s loaded up with little hidden things and stuff to uncover. If you like to get lost in a game’s world, this is a terrific one for it, with lots to do.

Providing the backdrop to that world is some excellent music too. Fitting the overall theme, the score is classical in tone, and sounds like it could have easily come off of an original PlayStation (for example). Unfortunately, there isn’t a voice cast to go along with it, but remember this is meant to be a throwback.

Along with the locations, the character art is great as well, including both the more detailed portraits and the in-action sprites. All of the game’s main heroes are well realized, and radically different from one another, with personality in spades. Opposite the playable characters, the bestiary and enemies aren’t all that great on the whole, but there’s nothing terrible about them either.

I haven’t played a JRPG in a long time. Other than trying the Octopath demo, the last time I played a game in the genre was probably a re-release of FF7. So in a very big way, Chained Echoes was a reintroduction to the genre for me. And oh what a reintro is was.

If you’re a fan, especially of the glory days of the genre, this is a game that you really need to check out. Chained Echoes looks and sounds terrific, plays excellent, and has a story that I can almost guarantee will command your attention and keep you playing.

Chained Echoes encapsulates arguably the best days of the JRPG. It features an excellently-detailed world and roster of characters, great play control, and a truly deep and enjoyable story. Add to that some innovation with the Overdrive system, and you have a winner.

Jason's been knee deep in videogames since he was but a lad. Cutting his teeth on the pixely glory that was the Atari 2600, he's been hack'n'slashing and shoot'em'uping ever since. Mainly an FPS and action guy, Jason enjoys the occasional well crafted title from every genre.
@jason_tas
Previous Marvel’s full Free Comic Book Day plans revealed
Next It’s Darth Vader at his most brutal in a spinoff of Marvel’s Black, White & Blood line