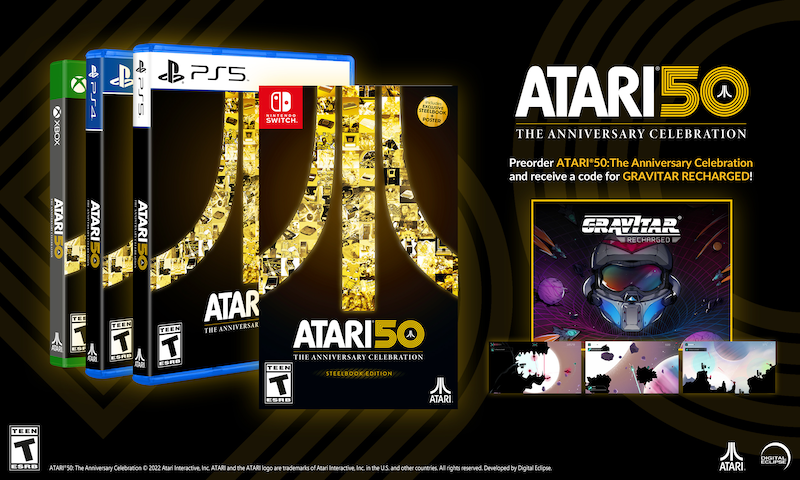 Fans of classic gaming will have a chunky little collection to play when Atari 50: The Anniversary Celebration lands at retail this winter.

We’ve seen collections of Atari titles before for sure, but Atari 50: The Anniversary Celebration is a little bit different. The bundle includes over 90 games from the company’s history, plus a ton of extras like schematics and sketches of hardware-past.

So if you’re a fan of the iconic video-gaming corporation, or just a lover of the industry, it’s something to keep an eye on. For the first time too, fans will get Jaguar games included on an Atari-branded collection. So for that alone, it’s something special.

If you’ve already made up your mind too, the game is up for pre-order as of this week. Here’s a peek:

Far more than just a collection of games, Atari 50: The Anniversary Celebrationis a true interactive history of the iconic publisher and a celebration of the small team in Silicon Valley who combined their creativity, curiosity, and passion, resulting in what would be Atari. Through an immersive linear timeline, players access a trove of over 90 video games organized by era, as well as various files and assets, including early development sketches, hardware schematics, internal memos, images, videos, and other “artifacts,” much of which have never been accessible by the public. Behind each game are the stories of Atari, what was happening at the company, what went into the creation of the games, and the hardware they ran on — told by the people who were there.

Along with the pre-orders going live, those who buy in early will get themselves a nice little bonus. That will come in the form of Gravitar: Recharged. The reborn version of the Atari classic is available for anyone who pre-orders in the US. Global pre-orders are open now as well, though it looks like those won’t include the extra freebie.

Atari 50: The Anniversary Celebration is set for release later this year for consoles and the PC.

Jason's been knee deep in videogames since he was but a lad. Cutting his teeth on the pixely glory that was the Atari 2600, he's been hack'n'slashing and shoot'em'uping ever since. Mainly an FPS and action guy, Jason enjoys the occasional well crafted title from every genre.
@jason_tas
Previous Trailer: Steelrising gets New Game Plus this month
Next Trailer: Labyrinthine horror title DarKnot set to haunt Steam’s NextFest