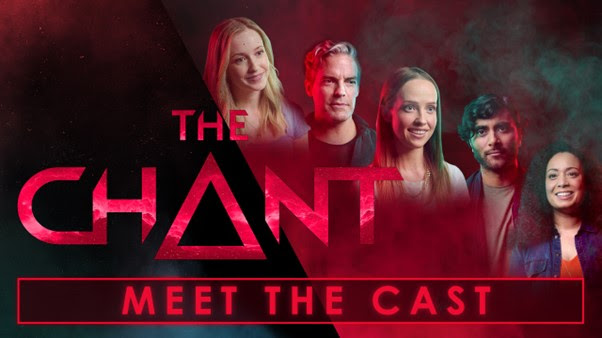 Home / News / Video: Supernatural horrors (and also some actors) await in The Chant

Prime Matter has built a pretty slick looking horror title with The Chant. And a big part of getting that world to feel real will be its cast.

Kim´s been looking forward to the retreat ever since she first heard about it from Tyler Anton (portrayed by Adam Millard) at one of his seminars. Since becoming a student of Tyler, she has felt more alive than ever. She is grateful that Tyler allowed and even encouraged her to invite Jess to join, but is Tyler the healing, powerful and spiritual leader he claims to be?

Tyler inherited the island from his troubled mother and now he’s ready to welcome a small group of followers to a transformational journey into Prismic Science. This is the opportunity he’s been waiting for, and it’s time to leave his mark on the world and maybe even the cosmos.

Hannah Wilson (played by Emily Tennant) feels nothing but excitement at the thought of welcoming the retreat attendees. She has spent the past several months as Tyler’s right-hand. Never before has she experienced such a sense of belonging.

Maya Kalani (portrayed by Nicole Anthony) is on the island because she believes this retreat is her first step towards confronting the scars of her past and discovering true healing. During her journey of self-healing she met Tyler, whose keen eye saw her pain and enrolled her in the retreat with ease. She embodies a special spirit and energy.

Since connecting with Tyler, Sonny Sonti (Praneet Akilla) has decided to channel his energy (and some family wealth) towards his vision to help promote Prismic Science and create a movement. This is his chance to find greater meaning and leave behind a pattern of broken promises and self-destruction.

As you can see, this is just a tease for a much fuller video, that’ll be coming along on the 16th of this month. Stay tuned for that to get a better look at who’ll be bringing The Chant’s characters to life.

The cosmic horror title arrives for the Xbox Series X|S, PS5, and PC later this year.

Jason's been knee deep in videogames since he was but a lad. Cutting his teeth on the pixely glory that was the Atari 2600, he's been hack'n'slashing and shoot'em'uping ever since. Mainly an FPS and action guy, Jason enjoys the occasional well crafted title from every genre.
@jason_tas
Previous Farm 18 revealed in first Call of Duty: Modern Warfare II “Intel Drop”
Next Nintendo Download: Put the “You” in University