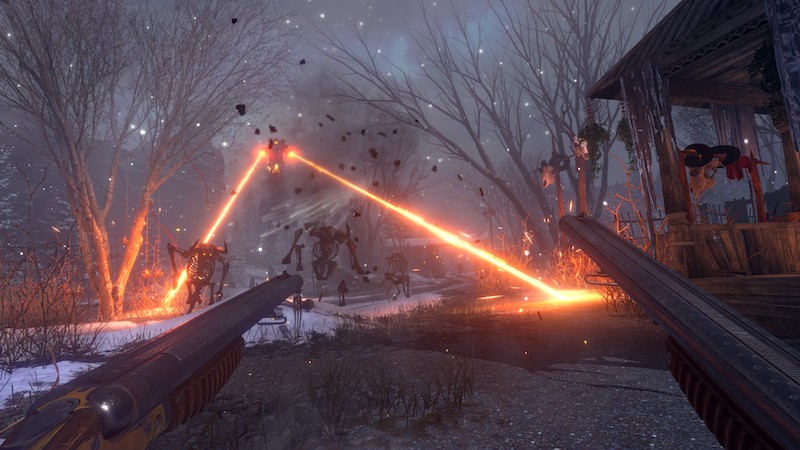 Not too long ago (2020), Croteam unleashed Serious Sam 4 on the world. The game brought more of the heavy artillery and crowds of enemies that series fans are used to. In fact, it was basically the same game that it’s always been, though it looked a heck of a lot better, and featured some great story elements and voice work.

While I’m a huge FPS fan myself though, I never played it. My understanding of the game comes from seeing it in action, and the above-linked review here on BG. There were a few reasons for that, namely that I didn’t have a whole lot of time… and I was a little reluctant to ‘turn back the clock’, for lack of a better term.

If that latter comment is anywhere close to your thinking, then I’ve got news for you. And that’s that the status of Serious Sam’s modern series is very, very good indeed.

Yes, while Serious Sam is a throwback to a simpler time in FPS land, it’s got a narrative behind it. And it presents some terrifically funny moments.

The standalone expansion (you don’t need a copy of SS4 to play it) sends Sam into the Siberian expanse. So yes, it’s cold. And yes, Sam is still in a t-shirt and jeans. He actually comments as to that at the top of the game, and the action flows from there.

The story is both incredibly simple and well put together. At its core it’s just Sam against a bunch of aliens (and a super-villain) in the arctic cold (again, while wearing a t-shirt).

But the writing is so clever in it’s tone, that it’s almost a sure thing you won’t tire of it. Well, unless you really hate fun I guess. Sam oozes personality, and doles out some actually funny commentary throughout the short adventure (it’s only about 7 hours long).

And on top of his contributions, there are other characters he meets along the way, and lots of other audio elements with bits and bobs that add to the story. A lot of thought went into every aspect of this game, and you can tell.

I’ve already mentioned a bunch about Sam, but I will add to all of that, that he plays really well too. That’s not to say that this game is innovative however. If you’ve played an FPS before, then you know what to expect from Siberian Mayhem.

Moving, shooting, and navigating levels is easy as pie. And it’s all pretty standard, as great as it is. There’s also a skill tree though, where you can add skills as you play, such as dual-wielding and initiating melee attacks from greater distances.

I have to add here though, that it’s not what the game does, but how it does it that feels fresh. Serious Sam throws a ton and a half of bad guys at you at any given moment. And sometimes it’ll do it in some extremely challenging and unique ways.

It also arms Sam with some awesome hardware, with which to battle all of those baddies with. You’ll need different guns to battle different foes, and you will, as usual in FPS’, find those as you play. Things heat up fast though, and you’ll be playing with shotguns and AK’s in no time.

Pro tip: get used to backpedaling and flat-out retreating (before turning to fire at a distance). You’ll be doing a lot of that, if you don’t want to get a prompt from the game to turn down the difficulty.

Full disclosure here, in that I did get a notice from Steam saying I probably don’t have enough of a rig to run Siberian Mayhem. I’m honestly not sure why, since I’ve run plenty of graphically intense games on my PC, which isn’t all that old at this point.

Nevertheless, I have to mention that since I might not be playing Sam with the level of splendor that it should be. That said, the game looks just fine to me. From the blustery cold of the frozen wastes, to abandoned Russian facilities and bases, Siberian Mayhem looks great. There are loads of detail in everything, and that includes the bestiary.

The enemies are wildly different from one another. Well, most of them are. Serious Sam has everything from skeletal cattle, to giant demons, to slobbering monsters, to shock troopers. And yes, it’s still got headless kamikaze’s too. Not only will the game throw dozens of one type at you at a time, but it’ll mix them up to the nth degree. That’s something that’ll require plenty of that aforementioned backpedaling.

I really want to mention the sound again too. While the music is good, the voice work is awesome. Sam’s voice is that of a comically ‘tough guy’, and it works fantastically. It is fantastic and actor John J. Dick is terrific as him.

Serious Sam: Siberian Mayhem isn’t the end all, be all of FPS gaming. It isn’t a game that shakes up the formula either, unless you count turning back the clock on the genre as ‘shaking it up’. But what it is, is a phenomenally fun, relatively short adventure that will have you blasting away at hordes of bad guys, while laughing at the excellent dialog.

A copy of Serious Sam: Siberian Mayhem was provided by Devolver Digital for this review

If you've played Serious Sam 4, then you know what to expect from Siberian Mayhem, a standalone expansion for that title. If not, then all you really have to know is that SM brings back the days when FPS gamers relished in tons of enemies, high-powered hardware, and simply outlasting foes... before grabbing a few health-packs. Sam's latest does all that with gusto, and looks and sounds great too. This one's fun, action-packed, and fast.

Jason's been knee deep in videogames since he was but a lad. Cutting his teeth on the pixely glory that was the Atari 2600, he's been hack'n'slashing and shoot'em'uping ever since. Mainly an FPS and action guy, Jason enjoys the occasional well crafted title from every genre.
@jason_tas
Previous Trailer: Bethesda and Tango Gameworks’ Ghostwire finally dated, coming next month
Next Video: Dive into the missions of Company of Heroes 3 in this new dev diary