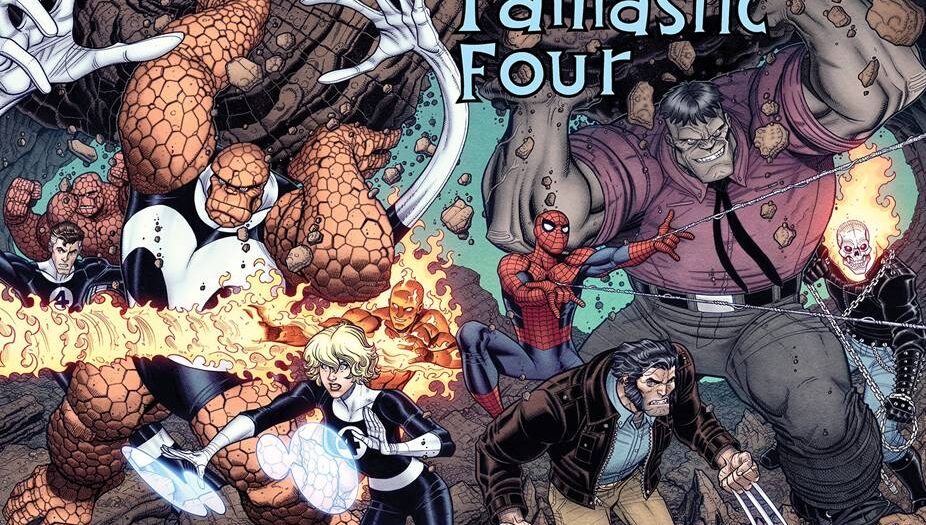 Home / Comics / Marvel dips back into the past once again, this time for more New Fantastic Four

Marvel dips back into the past once again, this time for more New Fantastic Four

The New Fantastic Four debuted back in 1991, as a fill-in for the then-absent team. Now they’re back in a fresh tale, set to take place in the original era.

The year was 1991, and the Fantastic Four was… gone. Trapped by Skrulls and believed dead, a new FF was formed to carry on. And what a team it was, with Spider-Man, Ghost Rider, Joe Fixit, and Wolverine on its roster.

As cool as this squad was, they didn’t last all that long, as they really only hung around for one story arc. Nevertheless, it’s a team that made a lasting impression on fans since all 4 of the heroes in it were red-hot at the time.

And now, they’re back. Well, they’re kinda back. Marvel is once again, as with X-Men, digging into past eras for this newly announced book.

In 1991’s FANTASTIC FOUR #347, comic book legends Walter Simonson and Arthur Adams introduced an unforgettable iteration of Marvel’s premier Super Hero team when they teamed up WOLVERINE, SPIDER-MAN, GHOST RIDER, and HULK as the NEW FANTASTIC FOUR. Though their time as the FF was brief, this unlikely group of heroes left a big impact, and now fans will get to return to this special moment in Marvel history in a new limited series kicking off in May. Written by comics great Peter David and featuring the Marvel Comics debut of artist Alan Robinson, NEW FANTASTIC FOUR will be set shortly after the events of the fan-favorite group’s first appearance, taking readers back to a classic era with a brand-new tale in the same vein as hit titles like X-MEN LEGENDS, MAESTRO, and SILVER SURFER REBIRTH.

Wolverine, Hulk(AKA Joe Fixit), Ghost Rider and Spider-Man have reunited to investigate a surge of violence in Las Vegas. And with demonic masterminds pulling the strings, they’re going to need some extra help… This all-new adventure will feature surprise guest stars aplenty, including the original FF and a series of mystery villains that you’ll never see coming!

Jason's been knee deep in videogames since he was but a lad. Cutting his teeth on the pixely glory that was the Atari 2600, he's been hack'n'slashing and shoot'em'uping ever since. Mainly an FPS and action guy, Jason enjoys the occasional well crafted title from every genre.
@jason_tas
Previous Trailer: Celtic-themed RPG The Waylanders arrives on PC
Next Marvel’s god of thunder and Star Wars’ Mandalorian return to stores from DST