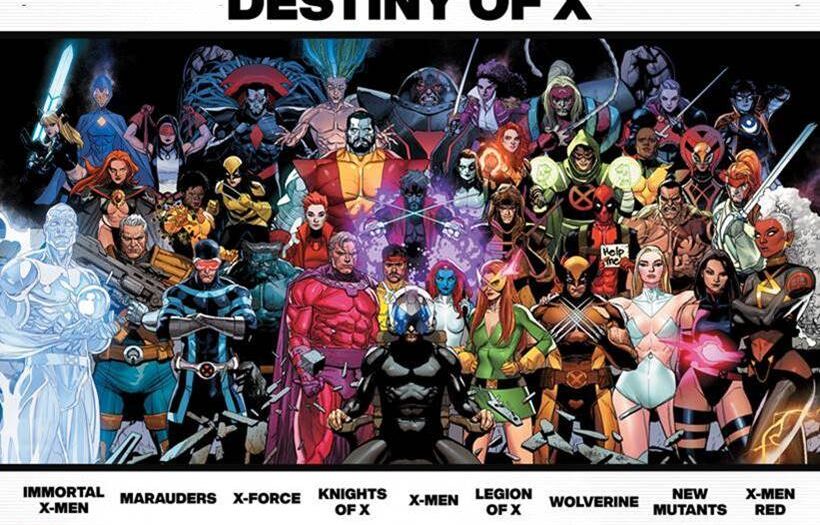 The age of Krakoa continues with Destiny of X, a set of major shakeups that’ll be rolling into 2022. Check out the teaser image and more.

Well, if you were one of the many fans who thought the age of Krakow was coming to an end, you were dead wrong. Marvel has taken he wraps off of Destiny of X, a new series of stories and comics that’ll be evolving the X-Men even further.

The new stories will be emerging from the “ashes of Inferno”, and X Lives of Wolverine and X Deaths of Wolverine, both huge X-storylines. Marvel promises though, that the “greatest triumphs and most crushing challenges” are yet to come.

From the collection of books yet to come, it’s easy to imagine that.

This new era will kick off with new titles such as IMMORTAL X-MEN, KNIGHTS OF X, LEGION OF X, and X-MEN RED, a stellar new creative team takeover on MARAUDERS, and revolutionary status quo changes for continuing titles X-MEN, X-FORCE, NEW MUTANTS, and WOLVERINE.

Fans can get their first peek at what’s to come in a new promotional image by Leini Francis Yu and Sunny Gho, an epic group shot starring some of the major players of the franchise’s upcoming sagas!

“The journey of the Krakoan Age is far from over!” Senior Editor Jordan D. White promises. “Our long-term plan that all our creators have been working on in our secret Council Chamber has only just begun to come to fruition. With the filling of the two empty council seats, the Reign of X has ended, and it’s time for mutantkind to reach for their destiny!”

As you can see, there are some teases in that above image. So use your imagination on that, as you count the days til spring of 2022.

Jason's been knee deep in videogames since he was but a lad. Cutting his teeth on the pixely glory that was the Atari 2600, he's been hack'n'slashing and shoot'em'uping ever since. Mainly an FPS and action guy, Jason enjoys the occasional well crafted title from every genre.
@jason_tas
Previous Trailer: The latest look at Matrix Resurrections calls back the original film
Next Trailer: Into the Starfield kicks off look behind Bethesda’s latest epic