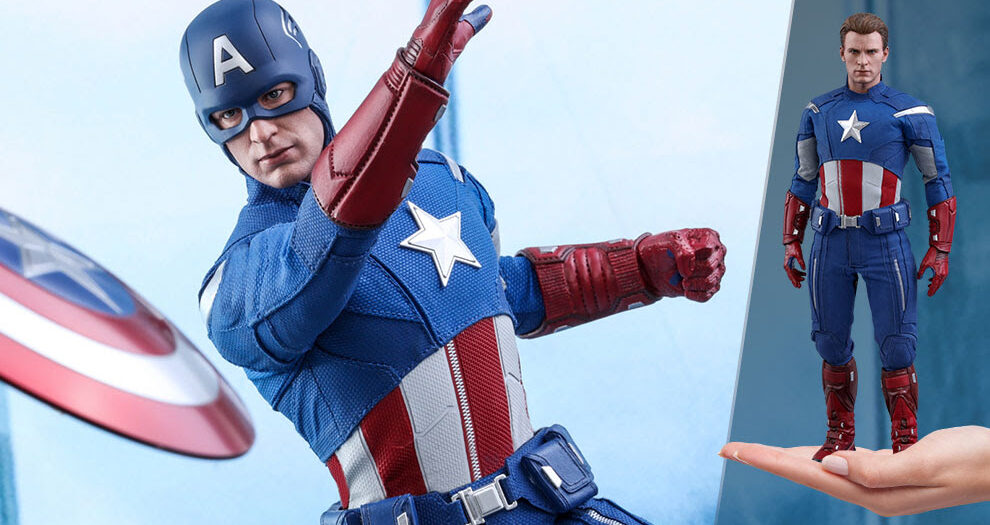 Based on the time-traveling adventures of the Avengers in Endgame, Hot Toys’ new take on the classic ‘Battle of NY’ Captain America.

Cap vs Cap was pretty easily one of the many highlights of Avengers Endgame. It happened when the team went back in time, hoping to retrieve the Infinity Stones and undo Thanos’ famed “snap” from Infinity War.

The Star Spangled Avenger was hot on the trail of the mind stone, embedded in Loki’s staff, when he met up with his younger self. Things didn’t go all that well from there.

Hot Toys’ new figure pays homage to that meetup. Though it’s also pretty much just the 2012 version of the MCU’s Captain America. So whether you want to recreate that specific Endgame scene on your bookshelf, or just really like that fleeting version of Cap’s costume, this figure should hit the spot.

The company’s retail partner, Sideshow Toys gave a full look at the new piece, in a special unboxing video.

The Avengers Time Heist was a plan to travel back in time and to gather the six Infinity Stones in order to undo the Snap. The Avengers split up into multiple time-traveling missions, with Captain America, Iron Man, Ant-Man, and Bruce Banner revisiting the epic Battle of New York in 2012. However, an unforeseen obstacle blocked Steve’s efforts to get his hands on the Mind Stone from Loki’s scepter — none other than Captain America himself!

Now, fans can recreate that classic Cap on Cap conflict by adding the Super Soldier’s 2012 counterpart to their collection!

Priced in at $259.99 USD, Captain America is up for pre-order right now. He’s not scheduled to ship out too far in the future either, and (fingers crossed) should be out some time from this December to February.

You can get your order in here.

Jason's been knee deep in videogames since he was but a lad. Cutting his teeth on the pixely glory that was the Atari 2600, he's been hack'n'slashing and shoot'em'uping ever since. Mainly an FPS and action guy, Jason enjoys the occasional well crafted title from every genre.
@jason_tas
Previous Nickelodeon All-Stars Brawl (Switch) Review
Next Trailer: Iron Harvest Complete Edition brings the full RTS experience to consoles