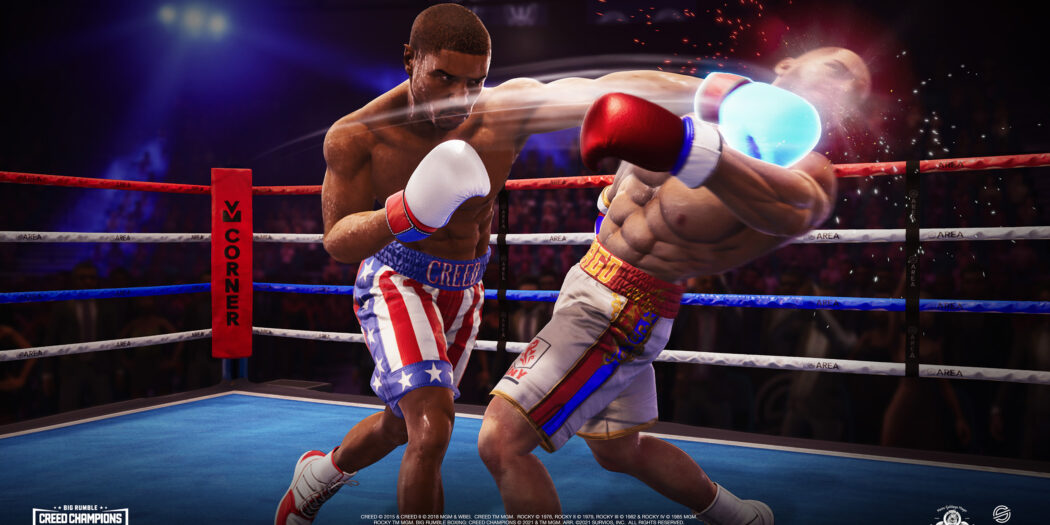 Yo Adrian! The sweet science returns to gaming with Survios’ first non-VR title, Big Rumble Boxing: Creed Champions. Time to take it to the ring.

I know… pretty much nothing about anything that this game features. That includes both boxing and Rocky movies. Then again, I also know next to nothing about boxing video games. So there’s that too. Three things.

That’s not to say that I haven’t ever seen a boxing match or a Rocky movie, or played a boxing video game. I’ve done all three, but at no level that I can be called anything close to knowledgable about any of the three.

I ask that you keep all of that in mind as I go into Big Rumble Boxing: Creed Champions from Survivos. And no, it’s not to give me any kind of break as I talk about the game, because I don’t need one.

Even if you know as little as I do about pugilism, there’s a ton of fun to be had with this one.

Even if you haven’t seen a Rocky movie, I think it’s tough not to know the background of the series. Actor Sylvester Stallone’s Rocky Balboa rose from the streets of Philly to capture boxing’s World Heavyweight Championship and do battle with some of the best of the best.

But that was decades ago. Since then, the series has transitioned into a whole new sequel-series of films, under the Creed name. In those films, Rocky becomes the manager for the son of Apollo Creed, his iconic opponent-turned-friend who died in the ring. See, it’s hard not to pick stuff up about these movies.

All of the above too, by the way, features in Big Rumble Boxing: Creed Champions. While I wouldn’t describe the story mode as ‘deep’, I would say there’s way more happening than I thought there’d be.

Each of the high points from the films are included in one way or another, though the various stories are padded out significantly. If you play through Apollo Creed’s campaign, for example, you’ll fight Rocky for sure, but also a guy in a bar in Mexico. Some of this stuff works, and some doesn’t whatsoever, though it might have with some alterations. After all, Rocky fighting a guy in a back alley is one thing, but doing so while wearing his boxing gear? Eh, yeah that’s not so great.

Fortunately, the actual gameplay is a ton of fun. So all the stuff that doesn’t make sense, well it’s not all that noticeable.

Big Rumble Boxing: Creed Champions is a purely arcade/fighting-game type of experience. It has way more in common with Street Fighter than Knockout Kings. Boxers face off one on one for sure, but they have super-punches and there are lots of special effects. Think a more grounded, side-view Punch Out!!, and you have a good idea of what to expect from the gameplay here.

Boxers in Big Rumble Boxing: Creed Champions have both light and heavy punches. And those punches can vary, depending on what direction you press on the stick while you hit the buttons. There’s also a grapple, to break up block-happy fighters, and a dash button where you can zip in and out of punching range. Then on top of all of that, there’s the super moves.

Different for every boxer, super moves can put an opponent down for the count or chew up a decent amount of their life bar. They build up as you fight, and can really make the difference between a win and a loss.

Speaking of, if you do find yourself on the mat, you simply mash X to get back up. This gets tougher to do the more you’re taken off your feet, and eventually becomes impossible. Yep, that’s when you lose.

Another pretty slick element, are the training montages. Yes, just like the movies, Big Rumble Boxing: Creed Champions has montages where your fighter will be punching away at a side of beef, and running on a treadmill. Sound boring? I actually found it fun, though I could see where some players might just want to get into the next fight.

Big Rumble Boxing: Creed Champions isn’t a bad looking game by any means, though it won’t be scoring a knockout on anyone either. Survios basically gave the title a look that crosses Rocky and crew into the cartoonish. The result is stylized, albeit with a realistic edge.

Personally, I’d much rather have that kind of an aesthetic than an over the top ‘realistic’ one in a game like this. But even with that, every fighter who is from the movies, and not all of them are, looks like an animated version of themselves. Animation is solid across the board as well, with all of the moves being pulled off nice and smooth.

Most of the arenas look good too, though again you won’t be knocked over by any of them. And actually, as mentioned some aren’t even arenas. I love the idea of expanding Rocky lore and adding in those back-alleys to brawl in. That’s really cool. It’s just that it feels incomplete.

That goes for the cinematics as well. They run along the same lines, as they don’t change at all and the default is showing the fighter in his ring gear. So even when they’re supposed to be elsewhere, or setting things up before a match, they’re still shown with trunks and gloves.

Just a quick note too, in that there’s no voice acting to the aforementioned cinema scenes. You’ll get some in-ring chatter when actually in a fight, but nothing beyond that.

So there’s a lot to like and some stuff to dislike about what’s basically an arcade boxing title. There’s a lot more to the former than the latter though, and if you’re a Rocky fan you can probably times that by 2.

Big Rumble Boxing: Creed Champions isn't a perfect arcade boxer. I would have liked to have seen an immediately unlocked roster, more attention paid to details like situational costumes, and maybe some special rules for stuff like street fights. But nevertheless, it does get all the biggest stuff mostly right. The simple and fun gameplay, over-the-top special moves, and the general look are all on target. It still might not be every fan's cup of tea, but if you're looking for something that's just plain fun, and lets you step into the boots of some of the best-known big screen boxers of all time, Big Rumble might hit the bullseye.

Jason's been knee deep in videogames since he was but a lad. Cutting his teeth on the pixely glory that was the Atari 2600, he's been hack'n'slashing and shoot'em'uping ever since. Mainly an FPS and action guy, Jason enjoys the occasional well crafted title from every genre.
@jason_tas
Previous NYCC 21: DST’s final reveal is a brand new Deadpool bust
Next Grand Theft Auto: The Trilogy – The Definitive Edition coming this year