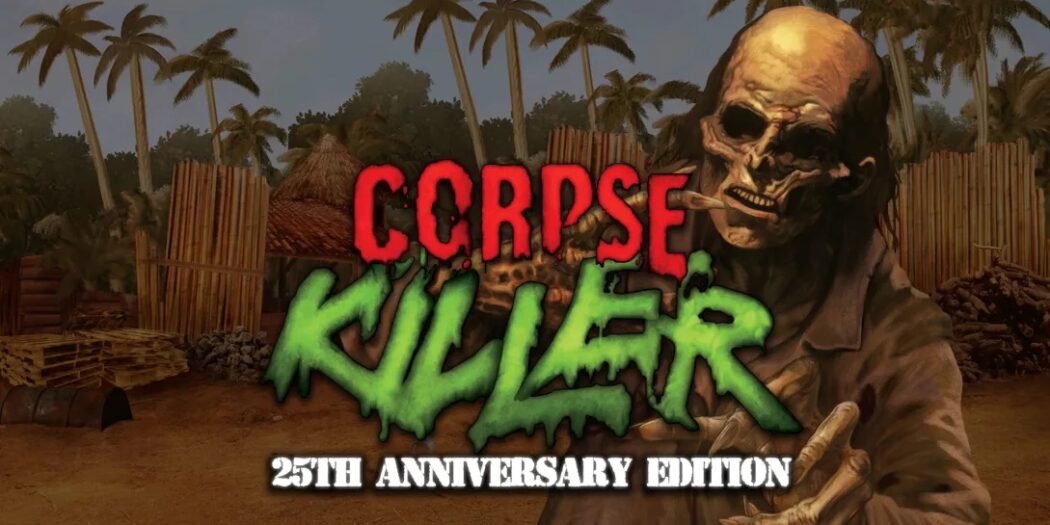 Limited Run Games brings Corpse Killer back to life for a new generation. So does one of the Sega CD’s campiest full-motion video games hold up?

The return of a ‘classic’

Corpse Killer actually first rose from the gaming-dead last year. Limited Run Games brought the title back in 25th Anniversary form for the PC, the PS4, and of course the Switch. It just saw a physical launch though, from that same company, and that’s how we’re bringing you this review. But while this is a new launch for Corpse Killer, it’s not its first rodeo.

From Digital Pictures, Corpse Killer originally hit the Sega CD, 32X CD, and 3DO way back in 1994. That was somewhat still in the midst of the FMV, or full-motion video, craze. If you didn’t live through that time period, really all you have to know is that adapting filmed video to gaming was a big deal.

There were a bunch of games that did it, and I’m not talking about Mortal Kombat. No, most games that used FMV were light gun titles. So real actors would pop up, and you’d have to blast ’em. Most FMV games were bad in a good way too, so they were tons of fun to play with friends.

That though, was then. In the modern age, light guns have faded away into nothing. That’s due to technical limitations of interfacing with modern monitors, but still.

These are all things to keep in mind as we dig into this game, because every bit of all of that comes into play.

I never really paid attention to the story of any light gun shooter. When my buddies and I popped one in, we pretty much ignored any and all narrative and just started shooting like mad and laughing at the (usually) terrible actors. I never actually played Corpse Killer with anyone else, but even playing it by myself I never paid any attention to the narrative. But shockingly, it does have one.

Corpse Killer sees a mad scientist Dr. Hellman (played by fan-favorite character actor actor Vincent Schiavelli) creating an army of the undead on a Caribbean island. While it’s probably not a great idea to crank out a couple thousand zombies, you really can’t fault him for the location.

The US military answers this threat by dropping in a squad of Marines, of which you play as one. But if you think a squad dynamic ensues, you’d be wrong. The story finds your unnamed Marine teaming up with a local, and a reporter.

Basically, you travel around an overmap kinda thing, stopping to shoot your way through missions. There are a number of side-missions, which I apparently didn’t play at all in the original, and the main story missions. So is Corpse Killer open-world? Well… sort of?

Does any of this work with no gun?

So yes, Corpse Killer is a light gun shooter. And no, there are no light guns for the Switch (or PC or PS4 for that matter). So how’s that work, and how much fun could it possibly be? We’ll answer those questions, though you can probably guess what they might be.

For starters, there’s no free-movement in Corpse Killer. It’s a true ‘on-rails’ experience, with the ‘camera’ moving from left to right, across the length of the game’s stages.

Your job is to shoot hilarious looking zombies as they shuffle, fly, and otherwise get up in your face. Yes, “fly”. Particularly funny are the zombies that literally fly from the background. There’s no explanation for this, they just kind of float at you.

In addition to all of those, there are also silhouetted undead, that flash brightly. These are explosive bad guys, and if you shoot them they’ll cause a blast that will take out all the surrounding zombies as well.

As for that shooting, it’s not quite as great as a light gun, but it’s not half bad. You get a crosshair to use, and it’s actually not terrible. I realize that might come as a shock, but it really isn’t. The crosshair moves smoothly, and has a good speed to it at the “normal” level.

Is it as much fun as using a light gun? No, not at all, but you knew that already. At the very least though, it makes it possible to actually play one of these games, which haven’t seen the light of day in a while.

All the looks of, well of something

Full-motion video games have a reputation for now looking all that good. They actually did at the time, and they haven’t exactly aged great. And Corpse Killer is every bit as ‘oof’ as you’d imagine. Actually, maybe more so.

Corpse Killer’s levels, if you haven’t put it together, are just side-scrolling images. As I mentioned the “zombies” move forward from those backgrounds (or throw stuff) to get you before you shoot ’em.

But the animation (which again, is actual actors moving around) doesn’t always match the action. So you’ll have, and I’m not kidding, zombies floating out of nowhere and flying at you. That’s supposed to happen, and isn’t a bug, and is 100% hilarious. Also, when you kill a rotter, they just kind of vanish. No ‘death’ animation, or anything like that; they just disappear.

As for the narrative segments, those play out in actual video too, in the form of non-playable cutscenes. These feature the game’s costars, as well as the aforementioned Schiavelli.

One thing I’d like to get back to for a second, is the overmap. It’s really cool that a game like this has that at all, and picking different missions along with side-missions as well is slick.

So, with all of that said, is Corpse Killer worth it? Sort of. Depending.

If you have some serious nostalgia for this game, then it’s definitely worth playing, even with the ‘no light gun’ thing. This is the FMV ‘classic’ through and through, so if you lived the goofy zombies and campy story before, you’ll still like it now.

If you haven’t though, there isn’t much to this other than the above. I can’t imagine too many gamers actually sitting down to play it for more than a few minutes at a time. That’s to say, unless you’re really into blasting actors in bad makeup.

Night of the full-motion dead

A no light gun, light gun game? Yep, that's what Limited Run Games' revitalization of Corpse Killer offers up. Surprisingly, it plays really well via a cursor, and is a pretty fun time if you remember the cheesy original well. If you don't though, it's hard to recommend a game that offers only a part of that game's fun.

Jason's been knee deep in videogames since he was but a lad. Cutting his teeth on the pixely glory that was the Atari 2600, he's been hack'n'slashing and shoot'em'uping ever since. Mainly an FPS and action guy, Jason enjoys the occasional well crafted title from every genre.
@jason_tas
Previous Jurassic World Evolution 2 looking to keep an authentic story
Next Trailer: Check out the latest look at Marvel’s Guardians of the Galaxy