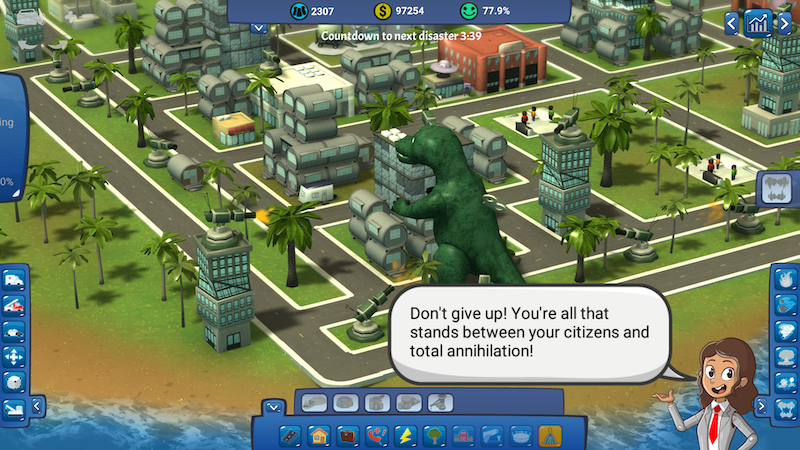 It’s a small, small city-builder. Mastiff’s latest builds a tiny little ‘topia, with toy-sensibilities, and if you’re looking for some stress-free fun, this is it.

Small, but not that small

I must admit, I had the wrong idea of what Tinytopia actually was. At first glance, I thought it was a city-builder that focused on smaller burghs, like towns etc. Cities that weren’t quite on the scale of a mega-city.

And in that regard, I was somewhat correct. But it’s a lot more than that, which is mainly due to the incredibly fun idea behind Tinytopia. It’s a toy-city-builder.

While there might not be all the minutia and micro-management as some other titles in the genre too, it’s a ton of fun. Not to mention, it’s also relaxing as all get out.

Yes, Tinytopia is all about toy cities, but don’t get the idea that it’s an overly simple game. There’s actually a ton happening in it to keep you busy. And the look of it, while cute, adds a terrifically fun flavor.

You’ll see that right off the bat, when Tinytopia introduces you to your adviser, who’s an action figure. Yep, hinge-joints all, your city-adviser pops up to walk you through the basics of your town, and delivers hints here and there.

But that’s just the tip of the iceberg in terms of exploiting its premise. The cities that you’ll work on are all built on a foundation of stuff like wooden floors, tabletops, and even teeter-totters (kinda). It’s got the aesthetic of a non-violent Toy Soldiers, if that makes sense.

That said though, this is a city-builder with many of the things that that genre dictates. You’ll have to keep your citizens happy, working, and with access to shopping, power, police, and fire stations. Tinytopia throws disasters at you too, including some fantastical ones.

Bottom line; if you have played a game like this before, you know what to expect. With Tinytopia though, it feels a bit more streamlined than usual, something that I really enjoyed since I tend to get lost in the details of these games at times. And when it starts to feel more like work than play, that’s a problem. You likely won’t get that from this game though.

So I’ve hinted at this above, but Tinytopia doesn’t get completely lost in the little details of what you might find in some city-builders. I could see though, that if you like that sort of thing and love managing every little element, that might be an issue.

But, all of that said, while Tinytopia doesn’t do anytngi radically different, it isn’t exactly devoid of detail either. There’s actually a good deal of stuff for you to tweak and that you need to pay attention to as you build and contend with different boards specific challenges.

That includes the aforementioned planning things out, like business placement and emergency services. And don’t forget the power plants and roads, because your citizens won’t.

But the series of ‘stages’ that Tinytopia offers will put more challenges than that in front of you. You’ll have to deal with hitting certain marks, placing special structures, and more. And as mentioned, there are disasters as well, including alien invasion and a wind-up, familiar looking giant lizard.

But while a good deal of the game will feel familiar, there are also a few things in Tinytopia that are pretty unique. The biggest that comes to mind is the way that larger buildings are put together. Namely, they’re stacked. And I mean that as in they’re stacked up on top of one another.

There’s a store, for example. And you can place that, and have yourself a small shop. Or you can add another store next to it and build it into an even bigger structure. Or you can clump 4 of the buildings up and have a superstore.

That same gimmick runs across almost all of the common buildings in the game, whether it’s businesses, houses, or police stations.

While I’ve already said a few things about Tinytopia’s looks, it’s worth talking about in a bit more depth. With levels set up like action figure or toy car playsets though, you might have an idea of what we’re about to cover already.

Tinytopia’s buildings aren’t overly realistic. Instead they all have a more cartoony look to them. And that carries over from just the visuals. If you place one wrong and it teeters over, it basically looks like a lightweight plastic house fell over. Kind of funny at times.

Likewise, trees break into pieces if you crush them with a road, and people move about like Fischer Price ‘Little People’ figures (if you remember those). Some even have arms that move like they have 5 points of articulation. You don’t get to see a ton of this, but it’s super cool when it happens.

Much like with the gameplay however, I will readily admit that all of this might be an acquired taste. If you’ve played any of the builders from the last few years, you know that the genre has gone in the other direction from Tinytopia.

So if you’re used to that, and loving it, it might be a bit of a shock to go into TT’s toy world.

So is Tinytopia for every fan of city-builders? Probably not, no. But if you have an open mind about playing something a little different and outside of the toy box, there’s a ton here to like.

And again, a slower pace makes for a pretty relaxing way to wind down your day.

Tinytopia does something that few other city-builders do, in that it manages to be unique. The 'toy' aesthetic of the visuals adds a ton of charm and personality to what's a streamlined example of the genre at its core. That's not to say that it's simple, just that it that it tilts towards pure fun than bogging players down with overly complex management tasks.

Jason's been knee deep in videogames since he was but a lad. Cutting his teeth on the pixely glory that was the Atari 2600, he's been hack'n'slashing and shoot'em'uping ever since. Mainly an FPS and action guy, Jason enjoys the occasional well crafted title from every genre.
@jason_tas
Previous Kingpin assembles a new Thunderbolts in Devil’s Reign
Next Judge Dredd arrives in Call of Duty: Black Ops Cold War